Book an hotel at: Tlalnepantla,Mexico 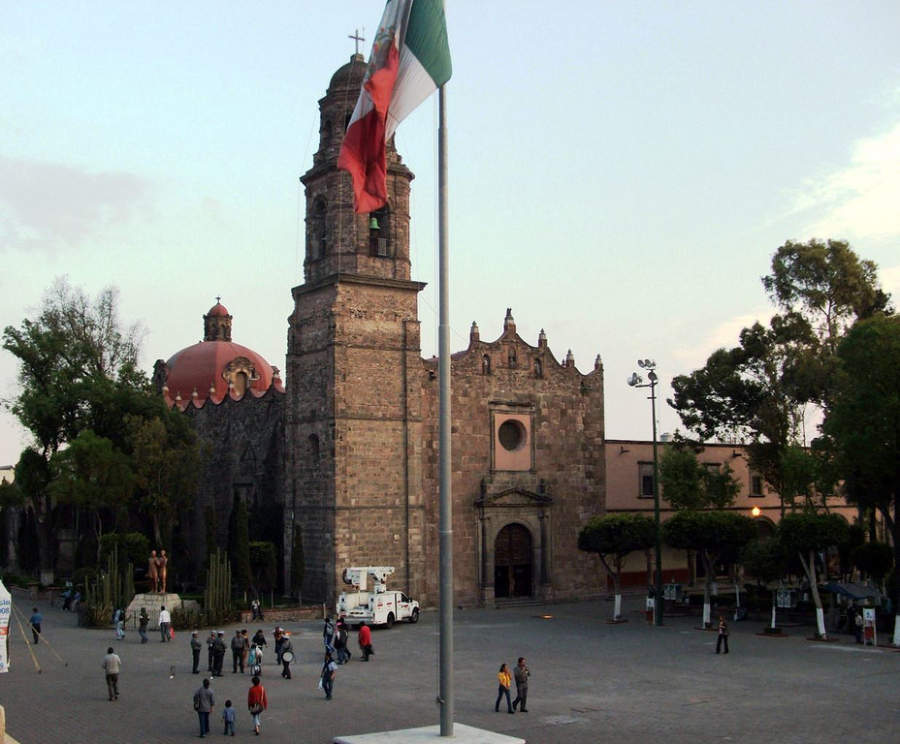 Tlalnepantla mixes pre-Hispanic constructions and colonial buildings with an active business area, that together result in a constrasting city

Sort of sanwich stuffed with potatoes and chorizo, topped with guajillo chili sauce and served with lettuce, cream, and cheese.

Pork meat fried in lard and usually served in tacos.

Ant eggs cooked in many ways, being in butter the most common.

The cuisine of Tlalnepantla has a strong influence of the cuisine of Mexico City due to its proximity. This city doesn't have a traditional dish par excellence, but you can find typical Mexican specialties, such as carnitas, consisting of pork fried in lard; pambazos, which are a sort of sandwich stuffed with potato and chorizo, covered in a guajillo chili sauce; tacos; tortas, another type of sandwich made with bread rolls called telera; tostadas, which are fried corn tortillas topped with refried beans, cheese, onion, lettuce, and a variety of stews; and barbacoa, lamb meat wrapped in maguey leaves and in cooked in pit.

During certain seasons you can try exotic dishes in local restaurants and traditional markets. Some of these dishes include snails, maguey worms, grasshoppers, and ant eggs, known as escamoles. Thanks to the growth of the city, the presence of multi-specialty restaurants increases every day, and its dining offer covers all tastes and budgets. Tlalnepantlas offers from to traditional Mexican restaurants to sophisticated venues serving gourmet cuisine.

The weather in Tlalnepantla, Mexico

The annual average temperature of Tlalnepantla is 15.5 °C (60 °F). During the hot season you can feel temperatures that exceed 25 °C (77 °F); we recommend packing comfortable clothes and shoes, sunscreen, sunglasses, and a cap or a hat. The rainy season coincides with summer, so it is not a bad idea to bring a light jacket and an umbrella.

Winters in Tlalnepantla are cold; the thermometers have come to record 10 °C (50 °F), so we suggest bringing a jacket or a sweater and a scarf. Tlalnepantla has a cuisine that includes restaurants that may require a specific dress code, remember to bring clothing and shoes a little more formal for the occasion.

Tlalnepantla is a city that combines the pre-Hispanic world, the colonial period, and the current hectic life. Tlalnepantla de Baz is a city and municipality in the State of Mexico, 17 kilometers (10.6 mi) north of Mexico City, and is characterized by its large industrial and business activity.

Tlalnepantla is a land of dramatic contrasts. The pre-Hispanic history is present in the Archaeological Site of Tenayuca. This place houses a wonderful building with a square base, on whose top are two twin temples in honor of the Mexica gods Tláloc and Huitzilopochtli. Another place to admire pre-Columbian buildings is the Archaeological Site of Santa Cecilia Acatitlán, featuring another construction similar to the Great Temple of Tenochtitlán. In this place is located what is believed to be an important ceremonial center formed by an 8-meter (26 ft) tall pyramidal building with a temple on top.

On the other hand, whoever visits Tlalnepantla will witness the Baroque style that boasts the Metropolitan Cathedral of Tlalnepantla, also known as the Temple of Corpus Christi. This temple was built by Mexica and Otomí indians, which resulted in a combination of pink quarry with gray stones. Adjacent to the Cathedral and opposite the main garden of Tlalnepantla you will find the City Hall, a building of great architectural beauty whose construction began in the 1950s and concluded until the 1990s. Inside you can see murals depicting important events in the history of Mexico.

Tlalnepantla has some former ranches and haciendas that are still standing to this day. One of them is Hacienda Santa Mónica, which dates back to 1573, the year it was acquired by Franciscan friars. Nowadays, the property houses a museum where you can see colonial furniture and paintings, clocks, lamps, desks, and even a 19th-century billiards table, as well as a tub decorated with 17th-century Talavera tiles, which it is said that was owned by "La Malinche", who was the interpreter of Hernán Cortés.

Another characteristic site is Hacienda de San Pablo de Enmedio, which opened in 1856 and it currently is used for social events, exhibitions, and as filming location. Rancho de San José Ixhuatepec is another must for visitors in Tlalnepantla. Besides being a restaurant, it has an equestrian club, a rodeo, and an educational farm. For the most adventurous, Ecoparque Acóatl is an excellent choice, because it has an artificial lake, where you can take ride a boat, the zip-line, ATVs (for rent), and enjoy outdoor spaces.

Tlalnepantla is a destination that offers options for both business and leisure travelers, offering multiple lodging options and several attractions to fully enjoy your time.

Other destinations in Estado de México