Book an hotel at: Airlie Beach,Australia 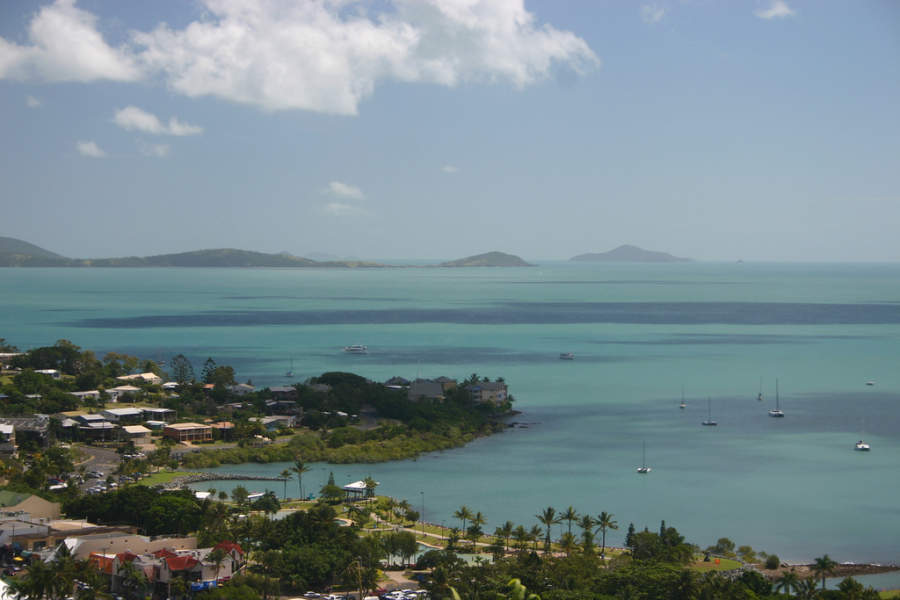 This port on the Coral Sea is the gateway to Whitsunday Islands National Park, and a popular tourist destination due to its vicinity to Austrialia's Great Barrier Reef

In Arlie Beach you can try some of the most representative dishes from the Australian gastronomy.
Situated at the shores of the Coral Sea, the town of Airlie Beach offers a large number of dishes whose main ingredients are products of the sea, such as lobster, fish, and abalone. One of these meals is "Fish and chips", a fast food of English origins consisting of fish of different types, battered and deep fried, and accompanied by French fries. You should also try "Vegemite", a dark brown paste made from yeast extract that is usually eaten with toast, sandwiches, cookies, and used as candy filling. It has a soft texture and a salty and slightly bitter taste. Another traditional dish is "Meat Pie", a delicious tart of small size filled with cubes of meat, onion, mushrooms, and cheese, which was considered in 2003 as the national dish of Australia. You should also try kangaroo meat in cuts and sausages, with a stronger taste than the traditional meat, and a smooth consistency.

Deja Vu restaurant is located on Orchid Drive, one of the most popular accommodation strips in Airlie Beach, only 100 meters (330 ft) from the main street. Here you can try all kinds of local delicacies while enjoying the tropical views and the sea.
More detailsLess details

The weather in Airlie Beach, Australia

The climate in Airlie Beach is tropical savanna with a dry season with the lowest temperatures of the year. The average temperature is 24 °C (75 °F), with highs of 27 °C (81 °F) and lows of 22 °C (72 °F). There are 102 rainy days with 1,802 mm (71 in) of annual precipitation. Officially, the cyclone season in Australia is from November to April, but cyclones are sporadic on these coasts between January and March.

Dry season (June to October): the dry season is also the coolest in Airlie Beach, with days that last about 12 hours and have from seven to ten hours of intense sunlight. The lower temperature is 18 °C (64 °F), recorded at night from June to August, and the average temperature is 22 °C (72 °F). At the end of this season, temperatures begin to rise, reaching 28 °C (82 °F) during the day and 22 °C (72 °F) at night. Despite being the dry season, the average number of rainy days per month is six, which can have heavy rainfalls with 95 mm (3.7 in) in June, but they decrease by September, accumulating only 29 mm (1.1 in). The sea has temperatures ranging from 22 to 25 °C (72-77 °F). You should bring light pants, shorts, cotton shirts, a sweater or light jacket for the evenings, comfortable shoes, a hat or cap, sunglasses, and sunscreen. Rainy season (November to May): this season in Airlie Beach is rainy and warm. Days have eight hours of bright sunshine with temperatures around 26 °C (79 °F), with highs of 30 °C (86 °F) and lows of 21 °C (70 °F). In November, rainfall is abundant, with an average of 112 mm (4.4 in) in six days, increasing in February to 351 mm (13.8 in) in 13 days. There is a monthly average precipitation of 217 mm (8.5 in) in 10 days. In more than one month, the sea temperature rises up to 28 °C (82 °F). You should pack clothing made of natural fibers in light colors to reflect the sunlight, a swimsuit, comfortable shoes, a hat or cap, sunglasses, sunscreen, and a raincoat or umbrella.
More detailsLess details

Airlie Beach is a town in the northeastern state of Queensland in Australia and a major port to visit the Great Barrier Reef and the Whitsunday Islands. This destination facing the waters of the Coral Sea is a popular tourist place, especially among backpackers and scuba divers, for being the gateway to the Whitsunday Islands National Park, a group of paradise islands known for their white sand beaches and turquoise water.

Other destinations in Queensland