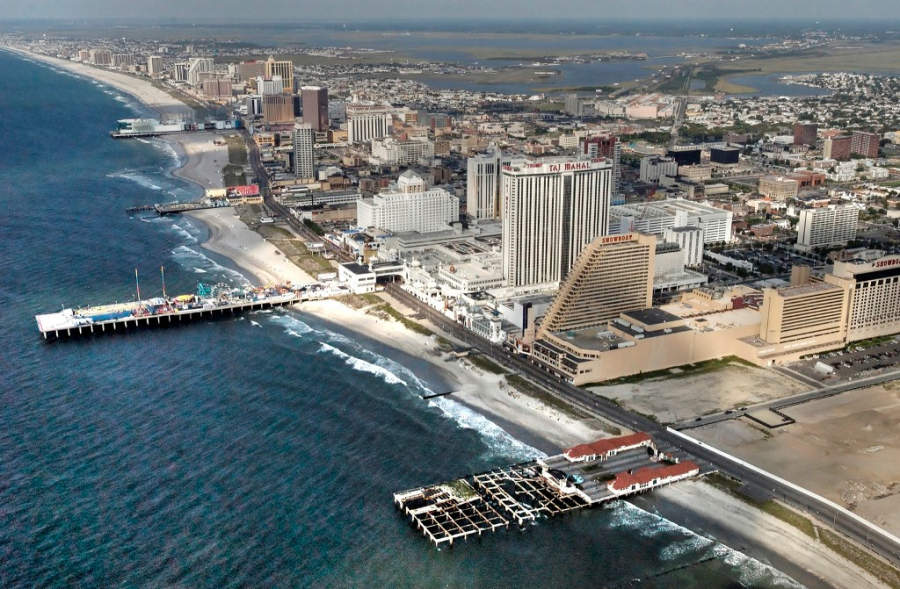 Atlantic City is a vibrant destination with great nightlife, that includes casinos and entertainment venues

A kind of thin pancake filled with different ingredients, savory or sweet.

Crustacean that can be cooked in different ways. Try it smoked or steamed.

Atlantic City owns a vast culinary offer, including establishments serving different specialties with prices for all budgets. You can eat from crepes with various ingredients at wow, holy crepe!, to Asian or American dishes at restaurants such as the Rainforest Café and PF Chang's.

If you are looking for a sophisticated and elegant atmosphere, Atlantic City has restaurants by world-renowned chefs. Make a stop at the Borgata Hotel and visit Bobby Flay Steak, or at Wolfgang Puck American Grill, both serving juicy grilled steaks and a variety of wines.

Atlantic City has a subtropical weather with warm and humid summers, with average temperatures of 26 °C (78.8 ºC). In contrast, winters are cool with a tendency to be cold

Summer months, June to September, have hot and humid days with temperatures between 26 and 32 °C (78.8 and 89.6 ºF), although the apparent temperature is lower due to the sea breeze. If you are traveling this time of year, we suggest you to bring your swimsuit, cool and comfortable clothing, sunscreen, and a hat. Also, pack a light sweatshirt and a rain jacket.

Winter, December to February, is cool with a tendency to have currents of cold air; the average temperature is between 2 and 10 °C (35.6 and 50 ºF). There have been snowfalls and temperatures of 0 °C (32 ºF). We recommend you to pack long pants, sweaters, and a thick jacket in case of snowfall.

Atlantic City is located in New Jersey, on the West Coast, and is known for being a destination similar to Las Vegas. Since the opening of its first casino in 1978, Atlantic City has become one of the most vibrant destinations in North America.

The Boardwalk, about 9 kilometers (5.5 mi) long, is the city’s tourist hub. It is lined with shops, restaurants, and hotels with big casinos, like the famous Trump Taj Mahal Casino Hotel (owned by Donald Trump), the emblematic Tropicana Casino and Resort, and the Caesars Atantic City. On this tourist corridor is Boardwalk Hall, an entertainment venue hosting from hockey games to concerts.

The beaches of Atlantic City are visited during summer months for water activities such as kayaking, jet skiing, sailing, and surfing. For family entertainment, there is Steel Pier Amusement Park, located on the pier. Regarding shopping, go to Tanger Outlets, The Walk, and The Pier Shops at Caesars, an area of ​​43,000 square meters (462,848 sq ft) with sophisticated shops and boutiques, located at the Caesar's Atlantic City hotel.

Some places you cannot miss are Ripley's Believe It or Not, Glowgolf Miniature Golf, and the Atlantic City Aquarium, located at Gardner’s Basin, which also houses different species of marine animals. Take advantage of your visit and go to the Borgata Hotel Casino & Spa, one of the most sophisticated hotels in the city, famous for being the location of The Real Housewives of New Jersey reality show.

***The official currency of the United States is the United Dollar (USD).

Other destinations in Nuevo Jersey