Book an hotel at: Baltimore,United States 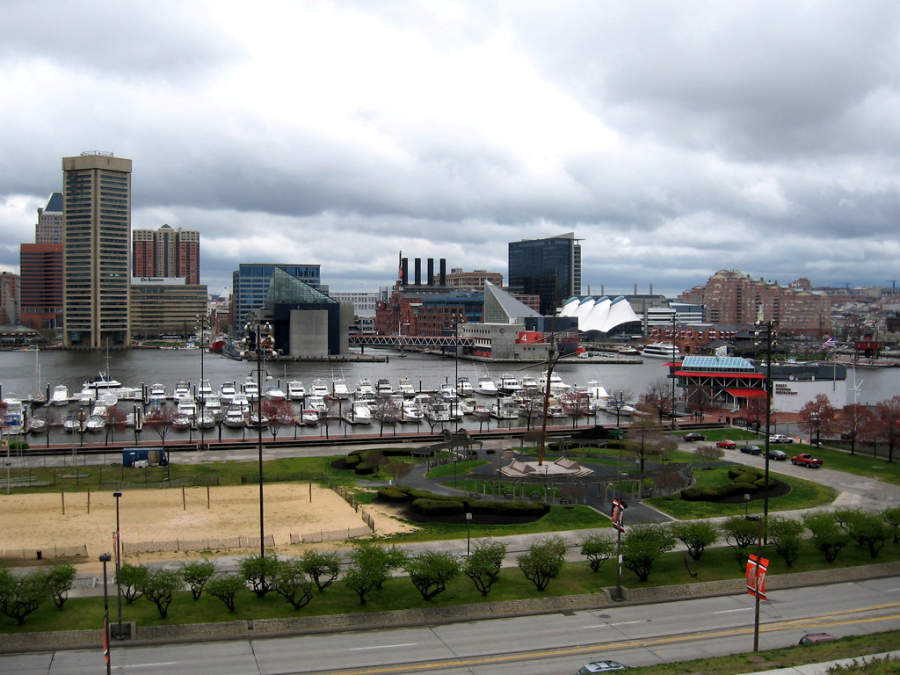 Charming city with cultural and recreational attractions for the whole family

Crabcake Small salty cake made of ground crab and stuffed with other ingredients.

Half and half Beverage with 50% iced tea and 50% lemonade.

Seafood is the first thing that comes to mind when we talk about Baltimore's cuisine, being crab the main ingredient in local recipes.
The city of Baltimore is internationally known for its famous restaurants serving crab, an ingredient used to create delicious dishes that satisfy even the most demanding palates. First of all, we must mention the famous 'steamed crab', seasoned with a vinegar dressing, beer, Kosher salt, and Old Bay Seasoning, a local condiment. To enjoy this dish as an authentic local, you must eat it with your hands and accompany it with shrimp, corn, and a cold beer. Other local delicacies prepared with crab include 'crabcake' and the 'vegetable crab soup'. For those who are not seafood fans, Baltimore offers the 'pit beef sandwich', a sandwich made with rye bread stuffed with meat roasted all night long in a pit and accompanied with a spicy radish sauce.

You can accompany these dishes with "Half and half", one of the most typical beverages in Baltimore, known as "Arnold Palmer" in other parts of the United States. This simple drink consists of half a glass of iced tea combined with half a glass of lemonade.

After the main course, you can enjoy the 'Lady Baltimore Cake', a typical local dessert dedicated to the wife of Maryland's founder, Lord Baltimore; this cake has white layers and a white frosting that contains bits of fig, raisin, and walnut. A variation of this dessert is "Lord Baltimore Cake", with yellow layers and a fruit frosting with nuts and crushed macaroon.

There are many places in Baltimore serving exquisite local specialties, such as Obrycki's Crab House and Seafood Restaurant, where you will find soup, cakes, and other dishes made with crab; or Chaps Charcoal Restaurant, located on the outskirts of the city and offering the delicious pit beef sandwich.
More detailsLess details

The weather in Baltimore, United States

Baltimore has a subtropical humid climate influenced by the proximity of the bay and the mountain range. The annual average temperature is 13 °C (55.4 °F), having summers with hot and humid days, cold winters with snowfalls, and springs and falls with pleasant temperatures during the day and a southern breeze. As a historical fact, the hottest temperature ever recorded was 42 °C (107.6 °F), in 1936, and the lowest was -22 °C (-7.6 °F), in 1984.

Spring (March and April): this season has average temperatures of 15 °C (59 °F) during the day and of 4°C (39.2 °F) at night. There are snowfalls in the early season and it rains an average of 8 days per month. We recommend packing warm clothing, including long pants, long-sleeved shirts, and a light sweater to wear during the day. You should wear non-slip shoes since the floor gets slippery due to the frosts, as well as a coat at night. Summer (May to September): summers in Baltimore are hot and humid, with average temperatures of up to 31 °C (87.8 °F) during July, and low temperatures in May with an average of 11°C (51.8 °F) at night. August has the heaviest rainfall of the year, with average rainfall of 100 mm (3.9 in), and along with September, it is when hurricanes and tropical storms can occur. We suggest you to wear light clothing made of natural fibers during the day and a sweater or a jacket at night. You should also bring a swimsuit, shorts, and flip-flops. Remember to protect yourself with sunscreen because the UV index is high. Fall (October and November): this is the driest season of the year, with an average of 6 rainy days. Temperatures decrease to an average of 11 °C (51.8 °F), having highs of 20 °C (68 °F) in October and lows of 3 °C (37.4 °F) in November. You should bring long pants, long-sleeved shirts, and a light sweater. We recommend you to include a coat or a jacket in your luggage to wear at night. Winter (December to February): winter days in Baltimore are cold, with an average temperature of -3 °C (26.6 °F) and highs of 7 °C (44.6 °F) in December. January has the coldest nights, with temperatures decreasing to an average of -5 °C (23 °F). Snowfalls are common during this season, with an average of 137 mm (5.39 in), increasing whenever there is a storm. You should pack winter clothing, including a scarf, gloves, a hat, wool socks, an overcoat, and thermal underwear. We suggest you to also bring non-slip boots.
More detailsLess details

Baltimore is a city known for its port, which was considered the second port of entry for European immigrants during the globalization period. This city was named after Lord Baltimore, an English colonizer who was the first owner of the Maryland colony.

Inner Harbor is the city's icon and one of the most important and well-known seaports in the United States, besides being the entertainment center nowadays. Baltimore offers a great variety of sports and cultural attractions; the city is popular for its museums, historic places, and neighborhoods, where you can see the influence of several cultures. Some of the most notable neighborhoods are Little Italy, Greektown, and Jonestown, where fine restaurants and bars are located. You can discover the heritage of Baltimore in the ethnic festivals organized by the different communities.

A visit to Baltimore is a cultural experience, as it has historic sites and places of ethnic and multicultural importance, as the neighborhood of Mount Vernon, where you can find museums and galleries. Maryland Science Center is one of the most exciting places in the city, featuring science and technology exhibitions.

The city offers endless attractions, from entertainment venues and interactive museums for children as Port Discovery, to sports places as Oriole Park. National Aquarium is home to 16,500 animals and 560 species, a symbol of renovation and pride of local citizens.

Other destinations in Maryland