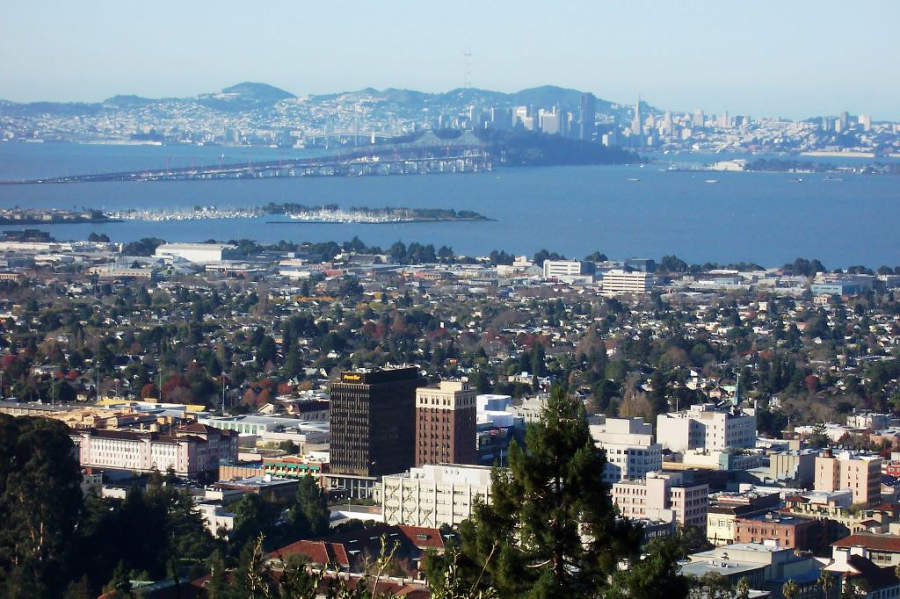 Berkeley is not only home of one of the most prestigious universities in the world, it is a city with a unique atmosphere featuring art, gastonomy, and culture

Unlike the traditional pizza, this dish is based on ingredients typical of the American cuisine, such as bacon, ham, or pineapple, among others.

Turkish-style coffee made from an Ethiopian shrub.

Gourmet Ghetto, a district famous for being the birthplace of Californian cuisine, is located in Berkeley

Berkeley is considered a first-class dining destination with skilled and creative chefs committed to quality cuisine provided with fresh ingredients and available in more than 350 restaurants.

The area of North Shattuck is known as the Gourmet Ghetto. It is an area where dining has been innovative since its begining, with a touch of social awareness and introducing organic igredients from local farms, a variety of coffee beans, and cuisines from other countries, serving pizza, chocolate truffles, or baguettes.

The Chez Panisse restaurant is considered the crib of Californian cuisine and it is ranked as one of the best in the world. The famous California-style pizza and the goat cheese salad were born in this place.

Peet’s Coffee & Tea, the popular coffee shop that first introduced roasted Arabica beans, was born in Berkeley. The original coffee shop offers limited editions of coffee or special reserves and it has a museum with historic artifacts and old coffee equipment.

The Cheese Board Collective offers cheeses from around the world, with special emphasis on local production. In addition, its bakery introduced the famous French baguette for the first time in the United States.

Juice Bar Collective is distinguished by the use of local organic, gluten-free ingredients with an ecological approach. Most dishes are vegan, including salads, pizzas, pastas, and sandwiches, although its menu includes hormone-free meat, delicious desserts, and pastries as the famous cherry pie.

Poulet Deli is another restaurant and gourmet store pioneer in Berkeley that offers its popular lemon, garlic or ginger-style chicken, or chicken marinated in garlic, among other varieties.

Summers in Berkeley tend to be cooler than in other destinations with Mediterranean climate due to the sea currents coming from the coast of California, which cause cold and noctural fog, which dissipates with the sun. The hottest months are from June to September, with highs of 23 °C (73 °F) and lows of 14 °C (57 °F). Spring and fall bring scarce rains and variable temperatures with moderate winds. We recommend packing clothes made of denim and cotton, as well as a warm sweater for the cool evenings.

Winters are usually rainy, having sunny days and cold nights. Snowfall is not usual in the city, although there are frosts on the hills. In January, the coldest month of the year, the maximum temperature is 13 °C (55 °F) and the lowest is 6 °C (43 °F), with a high percentage of humidity. We suggest packing a warm sweater or a thick jacket and a folding umbrella or a rain jacket.

This destination houses one the oldest and more prestigious universities of the United States, the University of California, Berkeley, known as UC Berkeley or just Cal. The university is one of the main attractions of the city since it is famous for its teachers and students, as well as its impressive 499-hectare (1,323 acres) campus. The green areas of the campus shape the Central Park of the city, with beautiful gardens, historic architecture, and quiet forest trails thorugh de area, connected to the rest of Berkeley.

Sather Gate is the landmark of UC Berkeley, built in bronze and steel, and designed by John Galen Howard in 1910. Sather Tower or The Campanile is a clock tower considered the third highest tower in the world; its bells ring every hour between 08:00 hrs and 22:00 hrs. Also, you can climb the bell tower and enjoy a panoramic view of the surroundings. Sproul Square is the most important meeting place for students, where historic protests and various social events have taken place.

Other important places wihtin this campus include the Botanic Garden of the University of California, famous for its rare and endangered species; the Lawrence Hall Science Museum, dedicated to spread scientific knowledge among children; the Art Museum and Pacific Film Archive, which is the center of visual arts at the University of Berkeley; and 32 libraries, which together shape the fourth largest library in the United States.

Around the campus you can find Berkeley Business District, the North Berkeley neighborhood, famous for housing Ghetto Gourmet, birthplace of Californian cuisine; and Berkeley Hills, where Tilden Regional Park is located. Other highlights are Claremont Neighborhood’s residential, one of the most luxurious districts of Berkeley; Telegraph Avenue with shops, street vendors, and restaurants that cater to tourists and college students; and Solano Avenue, which is the largest commercial area of Berkeley.

Regarding culture, Berkeley features more than 100 art and cultural centers, where the Berkeley Art Center, that offers visual arts exhibitions; the Berkeley Repertory Theatre, offering an attractive billboard that awarded with a Tony Award; and the California Jazz Conservatory stand out.

Other attractions in Berkeley include Adventure Playground, considered one of the best amusement parks in the United States; César Chávez Park, a wildlife sanctuary with picnic areas and cycling; and the Habitot Children's Discovery Museum, which even has areas for babies. In addition, the city houses a marina and hotels of different categories.