Book an hotel at: Buffalo,United States 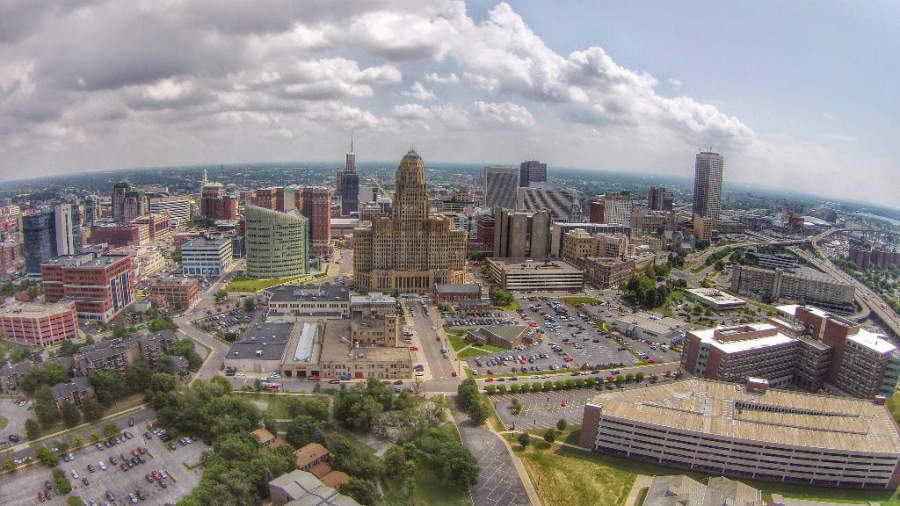 Buffalo is a cultural destination full of art, architecture, and with a great diversity of events

It is a type of sandwich made with roast beef, accompanied with horseradish, pickles, and potato chips.

Fried chicken wings dipped in a spicy sauce, generally accompanied with celery, carrots, and some dressing.

The gastronomy of Buffalo has been influenced by various cultures such as the Italian, German, Greek, and American, among others

Among the dishes that you can try on your visit to Buffalo are the beef on Weck sandwich, a sandwich made with roast beef, served with horseradish, pickles and fries; wardynski's kielbasa, a type of sauce from Central and Eastern Europe; pierogi, which are dumplings without yeast, boiled and then baked or fried with butter and onion; they are stuffed with potato, ground meat, and cheese or fruit; and lastly, the famous fish fries. Some dishes created in the city are the charcoal broiled hot dogs and the famous buffalo wings.

To sweeten the palate you can try the sponge candy, made with brown sugar, corn syrup, baking soda, and vinegar.

The weather in Buffalo, United States

Winters in Buffalo are cold and snowy, with thaw and rain between late December and early March. Most snowfall in the city is due to the lake effect, when the cold air touches the warm waters of the lake, creating clouds. Although summers are sunny and dry, there can be rainfall, usually in the evening. The sunniest months are June, July, and August.

If traveling in summer, to go out during the day we recommend you to wear comfortable clothes and walking shoes, a cap or a hat, sunglasses, and sunscreen, while in the evening you should wear a sweater or a light jacket, long pants, and closed-toe shoes. If traveling in winter, you should pack warm winter clothing such as long pants, sweatshirts, sweaters, jackets, a scarf, gloves, and a hat. Don't forget to bring an umbrella or a rain jacket in case of rain.

Buffalo is located in Erie County, in the state of New York, on the easternmost side of Lake Erie, and close to the Niagara River. This city bordering with Canada offers easy access to Niagara Falls, only 30 minutes away. It is the second largest city in the state and is part of the Buffalo-Niagara metropolitan area. Buffalo is known as a cultural, educational, and major medical hub. It comprises 32 districts and 28 suburbs belonging to the metropolitan area.

The city has received several nicknames, such as The Queen City, The Nickel City, The City of Good Neighbors, and The City of Light. Buffalo has a significant number of skyscrapers, highlighting the One Seneca Center, Buffalo City Hall, the Rand Building, Main Place Tower, and the Liberty Building. This city is distinguished for its American architecture of the 19th and 20th centuries; 80 sites have been included in National Register of Historic Places. Among the buildings that are on this record are the Basilica of St. Adalbert, Corpus Christi, Kleinhans Music Hall, and Temple Beth Zion, to name a few.

In addition, Buffalo was the first city to have a system of interconnected parks and avenues, leaving aside the traditional independent parks. Another interesting fact is that Hotel Buffalo was the first hotel in the world to have a private bathroom in each room. Buffalo is home to more than 50 art galleries, public and private, including the Albright-Knox Gallery of Art, the Burchfield-Penney Art Center, the Hallwalls Contemporary Arts Center, and CEPA Gallery. You can go to a variety of artistic events at Kleinhans Music Hall, featuring the Buffalo Philharmonic Orchestra, and the Shea Center for the Performing Arts. The Buffalo Theatre District has more than 20 professional companies.

Try your luck at the Seneca Buffalo Creek Casino, Seneca Gaming & Entertainment, or the Seneca Niagara Casino & Hotel. You cannot miss shopping while being in a destination like Buffalo. Some places you can go to are Elmwood Village, Walden Galleria, Hertel Avenue, Boulevard Mall, and Fashion Outlets, among many others.

In Buffalo you can be part of various events, such as Shakespeare in Delaware Park, one of the largest free outdoor Shakespeare festivals in America; the Allentown Art Festival, the Taste of Buffalo, the National Buffalo Wing Festival, Thursday in the Square, which is a free weekly concert held from May to August at Lafayette Square, and Juneteenth Festival; all of them conducted in summer. In winter you can enjoy Ball Drop Buffalo, the Buffalo Powder Keg Festival, and the Labatt Blue Pond Hockey Tournament.

Other destinations in Nueva York