Book an hotel at: Cartagena,Colombia 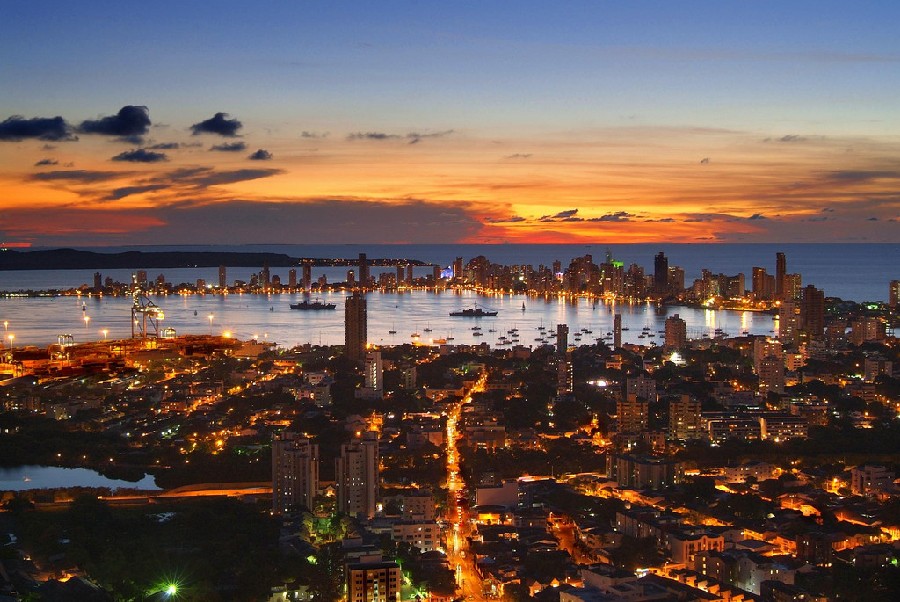 Sancochos Typical soup of the region prepared with meats, vegetables, and spices.

Yam sweet Traditional sweet based on yam with coconut, sugar, and cinnamon.

The cuisine of Cartagena is based on seafood, including fish as grouper mixed with vegetables. You can enjoy local flavors, indigenous, Spanish, and African heritage producing an extraordinary fusion of flavors.
Although the dishes of this beautiful city are constituted mainly of fish, another delicious ingredient is meat, primarily rabbit. Among the most traditional meals of this region we can mention "caldero", consisting of fish cooked over charcoal fire. Another dish that you can enjoy is "arroz con carne en tabaquito", consisting of small pieces of salted meat mixed with rice. Another very traditional specialty is the delicious "viudas", containing beef or pork and chicken steamed with vegetables and served with cassava or banana. Among the most popular soups you can find "sancochos" and "mote de queso", prepared with yam (a fruit similar to cassava) and chunks of cheese, served with roasted eggplant.

It is customary to accompany this dishes with a tropical fruit juice, mainly made of mamón (papaya) and corozo, although it is also very common to find them made of mango, tamarind, creole cherry, and plum. For specialized or more sophisticated meals, you can also enjoy red, white, and rosé wines produced in Cartagena.

If you usually delight your palate after a delicious meal, it is traditional to enjoy dried melons and figs, along with typical sweets as "Tocino de Cielo" and "arrope" sweet.

To enjoy any of these dishes you can visit Cocina de Pepina, located in the neighborhood of Getsemani, which serves the typical food of this destination.
More detailsLess details

The weather in Cartagena, Colombia

Cartagena has a tropical humid and dry climate with a relative humidity of 84%. The city has a rainy season and a dry season, but temperatures do not vary much between both seasons. The annual average temperature is 27 °C (81 °F), with average high temperatures of 31 °C (88 °F) and lows averaging 24 °C (75 °F).

Rainy season (May to November): these months have an average rainfall of 107 mm (4.2 in). Cartagena has a very warm climate, and this season is no exception, with high temperatures of 31 °C (88 °F). Despite being located on the Caribbean, the city is rarely hit by hurricanes; the last was Joanne in 1988 and it came much weakened after hitting Puerto Rico. You should wear lightweight clothing made of natural fibers, as cotton, which will keep you cool, as well as sunscreen and sunglasses. Remember to bring an umbrella or a rain jacket. Dry season (December to April): these are the driest months of Cartagena, with an average rainfall of 12 mm (0.5 in). The driest month is February, with almost no rain. Although the temperatures are still quite high in this season, averaging 27 °C (81 °F), frequent winds cool the felt air temperature. You should wear light and comfortable clothing, sunglasses, sunscreen, and a hat to protect yourself from the Caribbean sun.
More detailsLess details

Cartagena de Indias, the walled city, is the capital of the department of Bolívar in Colombia, in the northern area of the country and offshore the Caribbean Sea. The city was founded by Pedro de Heredia in 1533 and it became one of the main ports in the Americas during the Spanish colonial period. The pirates constantly ravaged these coasts during the 16th century, until King Philip II instructed to build 11 kilometers (6.8 mi) of walls to defend the city.

Cartagena was declared World Heritage Site by UNESCO in 1984, quickly becoming a major tourist destination. Within the walls, in the oldest part of the city, you can find some of the main attractions, such as Convento de Santo Domingo, the oldest church of the city. Other highlighted sites that you cannot miss include Torre del Reloj, at the entrance of the old area; Plaza de la Aduana, Palacio de Gobierno, and Catedral or Convento de San Francisco.

There are also very popular sites such as Castillo de San Felipe de Barajas and Fuerte Pastelillo, located outside the walls. Calle del Arsenal is a street famous for its restaurants and exceptional nightlife.

On the outskirts of Cartagena you can visit the beaches of Bocachica, where you can find Fuerte de San Fernando de Bocachica; and Islas de Rosario, an archipelago ideal for diving enthusiasts, where you can also find Acuario de San Martín, one of the most beautiful aquariums in the Caribbean.

***The official currency of Colombia is the colombian Peso (COP).

Other destinations in Bolívar