Book an hotel at: Darwin,Australia 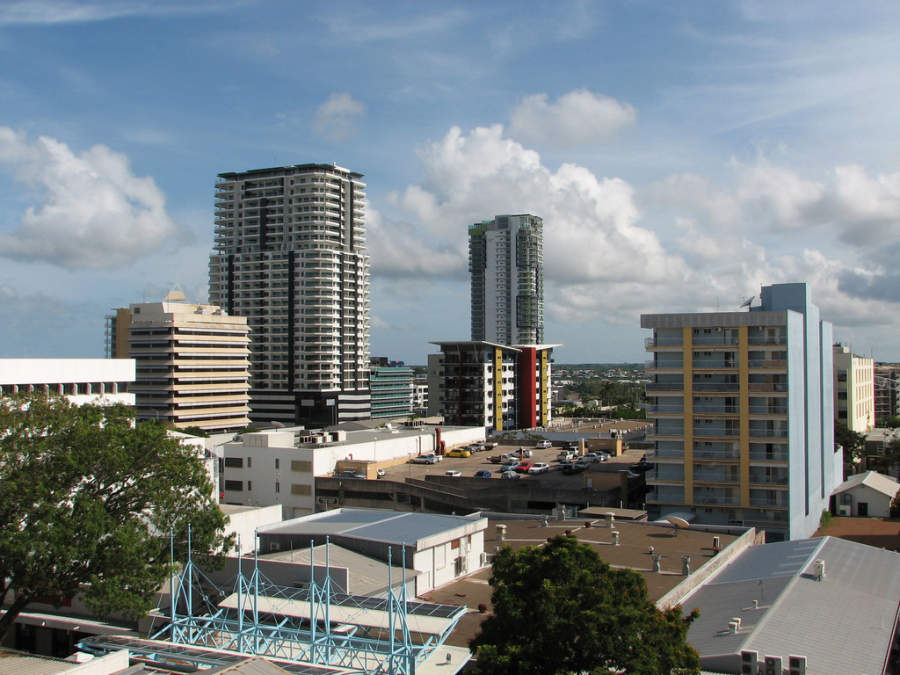 Stir Frying Vegetables and meat chopped into small pieces and cooked in a wok.

Australian Hamburger with The Lot Lamb burger with vegetables, pineapple, and fried egg.

Darwin will surprise you with a cuisine for those who want to enjoy more than just simple food. Local ingredients create particular aromas and flavors for an exotic menu resulting from the gastronomic and cultural diversity of this destination.
Most of the dishes in Darwin have an Asian influence and have been adapted to local ingredients, creating a fusion cuisine. As a result, regional gastronomy is present with dishes such as "Carpetbag Steak," a thick cut of meat with a pocket into which oysters are stuffed, marinated in red wine, garlic, pepper, blue cheese, and oregano. The meat is grilled and served with salad or sautéed vegetables. "Stir Frying" is a dish consisting of pieces of vegetables and meat with spices and broths, everything is prepared in a "wok" or concave pan. "Australian Hamburger with The Lot" is a burger made with lamb with vegetables such as onions, tomatoes, lettuce, a slice of pineapple, beets, a fried egg, and bacon strips.

A dessert that you must enjoy in Darwin is "Pavlova," a meringue cake made with eggs, sugar, white vinegar, and cornstarch with a hint of vanilla that has a crunchy outside and creamy inside. It is usually covered with a layer of whipped cream and decorated with fruit such as kiwi, passion fruit, and strawberries.

To please your palate with any of the typical dishes of Darwin, you can visit Santa Fe Café, which has a menu specializing in Australian and international cuisine.
More detailsLess details

The weather in Darwin, Australia

Darwin has a tropical climate with two seasons: a dry season with minimum rainfall and a rainy season with abundant and torrential rainfall. Low and high temperatures usually vary only from one to three degrees per year, the weather is always hot during the day and warm at night. There is an average annual temperature of 27 °C (80.6 °F) and a total rainfall of 1,729 mm (68 in).

Dry season (May to October): the heat index goes from medium to high during this season in Darwin, and the relative humidity is low due the scarce rainfall. The driest months are from June to August, while May, September, and October accumulate from 16 to 71 mm (0.6-2.8 in) of rainfall. The mean temperature is 26 °C (79 °F), with lows from 19 to 25 °C (66-77 °F) and highs from 30 to 33 °C (86-91 °F). The sea temperature ranges from 26 to 29 °C (79-84 °F), and the UV index is extremely high from August to October, and very high from May to July. You should bring short-sleeved shirts, Bermuda shorts, shorts, and dresses, as well as a swimsuit, flip-flops, comfortable shoes for walking, a hat or cap, sunglasses, a light sweater for cool nights, and a portable umbrella for rainy days. Remember to use sunscreen at all times. Rainy season (November to April): this season in Darwin is slightly warmer than the dry season. Relative humidity is high, causing a very high heat index. During these months the rains range from abundant to torrential; January is the wettest month with torrential rains reaching 427 mm (16.8 in) in 21 days, while the driest month is April with 102 mm (4 in) in nine days. Days have temperatures from 31 to 33 °C (88-91 °F), and from 24 to 25 °C (75-77 °F) at night, with a mean of 28 °C (82 °F). The UV index is extremely high, and the sea reaches 30 °C (86 °F). To stay cool during this season, you should wear light colored clothing to reflect the sun rays, made of natural fibers as cotton. Remember to bring a swimsuit, flip-flops, comfortable shoes for walking, sunscreen, a hat or cap, sunglasses, rubber boots, and a raincoat.
More detailsLess details

Darwin is the capital and main city of the Northern Territory in Australia. The city is a major port and the main link with Indonesia and East Timor. Darwin is a modern city, rebuilt twice during the 20th century: the first time after the attacks during the Second World War, and the most recent reconstruction was in 1974, after the impact of Cyclone Tracy.

One of the most important tourist attractions in Darwin is Christ Church Cathedral, one of the few buildings still preserved, built in 1902. The remnants of the Old Town Hall and the old storage tunnels built after the Second World War are also tourist attractions. George Brown Darwin Botanic Gardens is home to many species, including orchids, mangroves, and several specimens of the peculiar Baobab tree. The city has several art galleries where you can buy pieces made in Aboriginal communities. Darwin has also several museums, including Australian Pearling Exhibition, which shows the history of the pearl trade, one of the main activities of the original communities of this region; the museum in the former prison Fannie Bay Goal; and Museum and Art Gallery of the Northern Territories, which also shows the natural history of this vast territory.

National parks are a reference point in Darwin, as in the rest of Australia, although some of them are away from the city. The most important include Kakadu National Park, located 300 kilometers (186 mi) from Darwin, with its important reptile farm and where Aboriginal communities still live; and Djukbinj National Park. Litchfield National Park is closer to the city; however, there is no public transportation available and you have to book a tour or go by car. There is an uranium mine in this place, but it is closed since 1971. Besides, this park has numerous waterfalls, including Wangi, Tolmer, Florence, and Tjaynera plus the curious sandstone formation called "Lost City."

There are several beaches in Darwin, the most popular is Mindil Beach, which is also the closest to downtown, while Casuarina Beach is 7 kilometers (4.3 mi) to the east and has a clothing-optional area. It is important to follow the instructions of the authorities, since there are box jellyfish on the beaches, and they can be very harmful.

Other destinations in Territorio del Norte