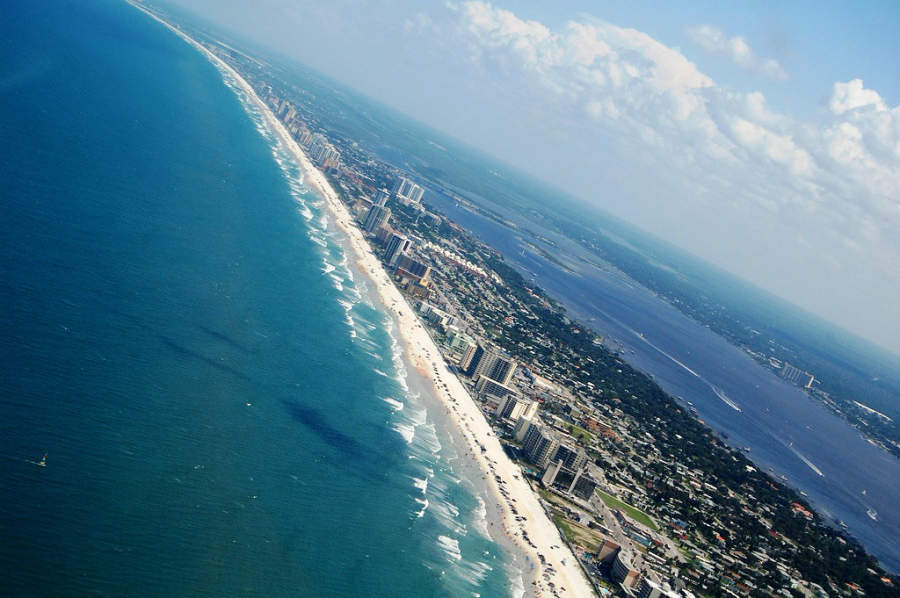 Daytona Beach, The World's Most Famous Beach, stands out for its wide and dazzling white-sand beaches on the coasts of Florida

Grilled beef patty in a bun, with lettuce, tomato, cheddar cheese, and ketchup.

Chicken, beef, or pork meat marinated in a sweet and sour sauce and cooked on the grill.

This destination, as other cities in the United States, offers restaurants with a wide variety of dishes from other countries. However, the traditional cuisine of Daytona Beach has a strong southern influence with dishes as famous as the fried chicken and BBQ, the latter consisting of chicken, beef, or pork meat marinated in a sweet and sour sauce and cooked on the grill. It is also very common to use the grill to cook hamburgers.

You will not have problems to find a restaurant where you can taste these dishes since they are available throughout the city. Near the coast, on the Daytona Beach Boardwalk, you can enjoy various dishes and seafood specialties. In the central area of the city and further away from the coast, you will find more traditional dishes and BBQs.

Daytona is famous for its warm temperatures most of the year, with an annual average of 21 °C (70 °F). During the summer, from May to October, temperatures range between 26 and 33 °C (79-91 °F); while in winter, between November and April, the thermometer drops to 10 °C (50 °F). The sea breeze helps to regulate the temperature by cooling the summers and keeping the winter a little warm. Regardless of the season of the year that you choose to visit Daytona Beach, it is important that you bring sunscreen, sunglasses and your swimsuit.

The summer bring rains, and August and September are the rainiest months. We recommend bringing an umbrella or a rain jacket if you have to travel to Daytona Beach during this season. By contrast, precipitation is quite rare between April and May.

The main attraction of Daytona Beach is its 37-kilometer (23 mi) coastline decorated with beautiful white sand beaches. The destination is known as The World's Most Famous Beach for its beaches and to stand out from other American cities that have the word beach in its name.

One of the most popular attractions is the Daytona Beach Boardwalk and Pier, an incredible and very fun place surrounded by shops, restaurants, and rides like the Ferris wheel and the roller coaster. In addition to the beach, this destination offers other recreational areas such as the Jackie Robinson Ballpark, opened in 1914, which includes a museum where you can discover the life of this baseball player and the way he changed history.

In Daytona you will also find museums and historical attractions. You can start by visiting the Museum of Arts and Sciences, one of the most important in the central area of Florida. This cultural venue has a 36-hectare (89 acres) environmental education center housed in an adjacent nature reserve, and owns a planetarium, an exhibition of more than 30,000 objects, and an interactive museum for children. You can also visit the Halifax Historical Museum that shows the history of Daytona from the prehistory to the present. To finish, you will have the chance to see the 53-meter (174 ft) high Ponce de Leon Lighthouse, a symbol of the city, the tallest in Florida and one of the tallest in the country.

Daytona Beach has become an impressive meeting point for racing and speed enthusiasts, either on two or four wheels. Daytona International Speedway is home to Daytona 500, the most important car competition in the United States. The race belongs to the Sprint Cup Series of NASCAR and takes place every year in February since 1959. Biketoberfest in October is an event that brings together thousands of motorcyclists from year to year and includes exhibits of automobiles, motorcycles, and items to decorate or improve their performance, as well as outdoor concerts, beach tours, and races at the Daytona International Speedway. The city houses Bruce Rossmeyer's Daytona, the largest store with Harley-Davidson® motorcycles and articles in the United States.