Book an hotel at: Esperance,Australia 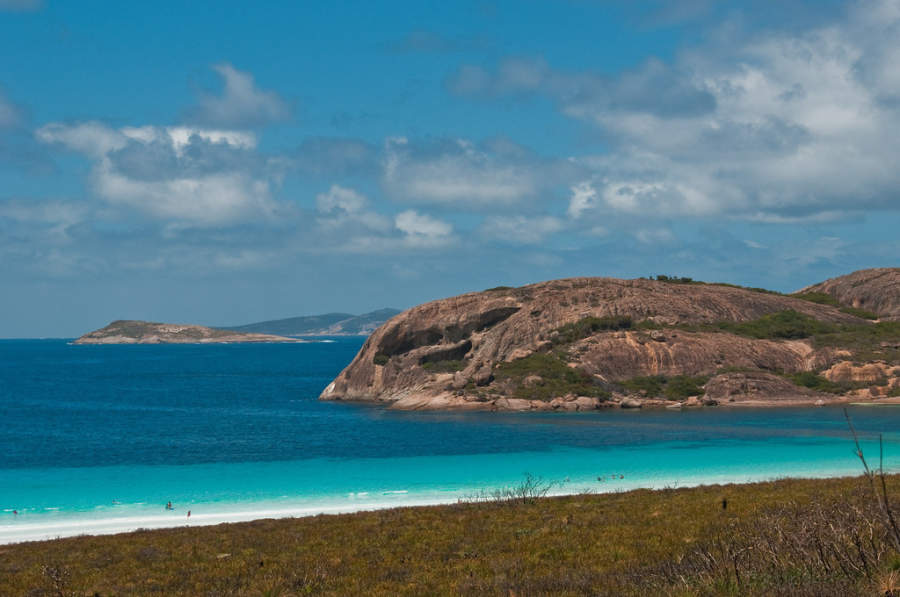 The gastronomy of Esperance consists of traditional Australian recipes.
A typical breakfast in Esperance consists of cereal, fruit, and toast with "Vegemite", a soft dark brown paste with a salty and slightly bitter taste which is made with yeast extract, which is also served in sandwiches, cookies, and used as sweet filling. The national cuisine is known for its cheeses, like the artisanal "La Luna Cheese", with a firm and earthy texture and a slightly acid and citric flavor. Other local delicacies include "Meat Pie", filled with small cubes of meat and sometimes onions, mushrooms, and cheese, which was considered in 2003 the national dish of Australia; and "Chiko Roll", a snack inspired by the Chinese spring roll, consisting of a fried roll made of egg and flour, stuffed with beef, celery, cabbage, barley, carrot, and other spices. "Damper" is rustic soda bread with a thick crust that is grilled and that was the main feed of the ancient settlers of Australia.

One of the most popular restaurants in Esperance is Loose Goose, the ideal place to try authentic Australian dishes. It is situated on Andrew Street, just one block from the beach.
More detailsLess details

The weather in Esperance, Australia

Rainy season (May to August): rainfall is abundant in these months, accumulating from 76 to 98 mm (3-3.9 in) in 14 to 17 days of rain per month, and July is the wettest month. This season in Esperance has a temperate climate with average temperatures from 9 to 18 °C (48-64 °F). July is also the coldest month, with a minimum temperature of 8 °C (46 °F). You should pack a jacket, long-sleeved shirts, comfortable shoes, thick pants, and bring an umbrella or rain jacket. Dry season (September to April): climate in Esperance during this season is from temperate to warm with average temperatures ranging from 13 to 23 °C (55-73 °F). January and February are the warmest months of the year, with a maximum temperature of 26 °C (79 °F). This season has sporadic rains accumulating about 35 mm (1.4 in) in nine days of rain per month. December is the driest month with 18 mm (0.7 in). It is advisable that you bring light clothing, sunglasses, sunscreen, and shorts for the day, as well as a sweater or jacket and jeans or thick pants for the evenings.
More detailsLess details

Esperance is located in Western Australia and its name is attributed to L'Esperance, one of the ships where the naturalist Jacques Labillardière arrived to this place in an expedition. For an unforgettable vacation, you should visit the natural attractions of Esperance, including Cape Le Grand National Park, where you can see kangaroos; and Cape Arid National Park and River Fitzgerald National Park, considered one of the most important with a rich flora and fauna. The most popular beaches of Esperance are Salmon Beach, Fourth Beach, and Quagi Beach, where you can relax and enjoy the sun, or camp and practice windsurfing. Another popular natural attraction is Lake Pink, with a pink hue caused by a high concentration of salt-tolerant algae.

If you are also interested in culture, Esperance offers art centers and museums like Cannery Arts Centre; Bijou Theatre, the oldest theater in Western Australia, and Esperance Museum, with collections of photographs and pieces of the Skylab, the first U.S. space station.