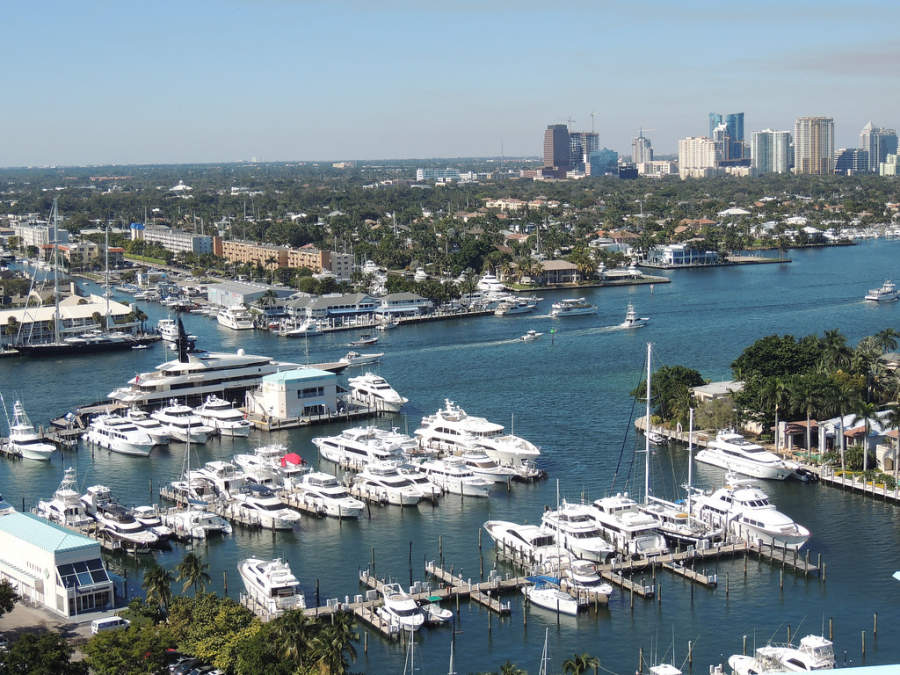 Crossaints Prepared with ham and vegetables, or in some occasions, with rice.

snack made with potato, cod and parsley, covered in breadcrumbs and fried in oil.

Cheesecake Traditional dessert made with cheese and cream.

Due to the influence of Cuban culture throughout the state, you can enjoy delicious dishes made with simple ingredients such as beef or lamb, which can be accompanied by delicious sauces and vegetables. Rice is also very important in the local diet, as well as the cod and potato croquettes. You can also try delicious Indian specialties, as well as Mexican, Chinese and Polynesian.

To sweeten your palate, all desserts are popular in Fort Lauderdale, from the refreshing and soft ice cream of different flavors, to delicious cheesecakes and apple pies.

To cool off, you can visit any bar, where you can enjoy a wide selection of cocktails and the most popular beers.

Rainy season (May to October): this season is very hot and humid, with about 16 rainy days per month, most of which have thunderstorms in the afternoons or the evenings. There are average high temperatures of 31 °C (88 °F) and average lows of 26 °C (79 °F). The rainiest months are June and September.

Dry season (November to April): the dry season has about 9 rainy days per month. Temperatures are slightly cooler, with average high temperatures of 26 °C (79 °F) and average lows that drop to 17 °C (63 °F). Although some cold fronts can occasionally lower temperatures, these rarely drop below 4 °C (39 °F).

We recommend bringing light clothing, your swimsuit, a towel, flip-flops, a change of clothes, sunscreen, sunglasses, and a hat or a cap. Remember to pack a light sweater or a jacket for cooler days, and an umbrella or a raincoat, especially during the rainy months.

Fort Lauderdale is located in Broward County, in the metropolitan area of South Florida, and it was considered part of Miami since 1789. This city is a popular American destination and a major sailing hub; currently, it is becoming an international business center. Fort Lauderdale is known for its intricate system of canals that allows many houses to have a private pier.

The Venice of America  has seven kilometers (4.3 mi) of beaches and 165 kilometers (102.5 mi) of local waterways, allowing water activities like diving and snorkeling to observe marine life, shipwrecks, and coral reefs. Tourists can also do various activities, including boat rides, windsurfing, water skiing, fishing, or just relaxing by the Atlantic Ocean.

Walk the pictorial Riverwalk along Rio Nuevo, hosting art and science events; and the Broward Center for the Performing Arts, featuring cultural and historical activities. At Esplanade Park, reflecting the past and present of the city, you can enjoy nautical interactive exhibits; you can also find picnic areas, exhibitions of native plants, and a butterfly garden.

The organization promoting water sports, International Swimming Hall of Fame, shows memories of the world's greatest water heroes. You can also visit several museums, including the Museum of Discovery and Science, the Museum of Art, the Old Fort Lauderdale Museum, the historic Bonnet House, the Old Dillard Museum and the Stranahan House Museum, as well as Fort Lauderdale Children's Theatre.

There are several places in the surroundings to be close to nature, as the Anne Kolb Nature Center in West Lake Park and Hugh Taylor Birch State Park, where you can find a pond, trails among nature, and access to the beach.