Book an hotel at: Hobart,Australia 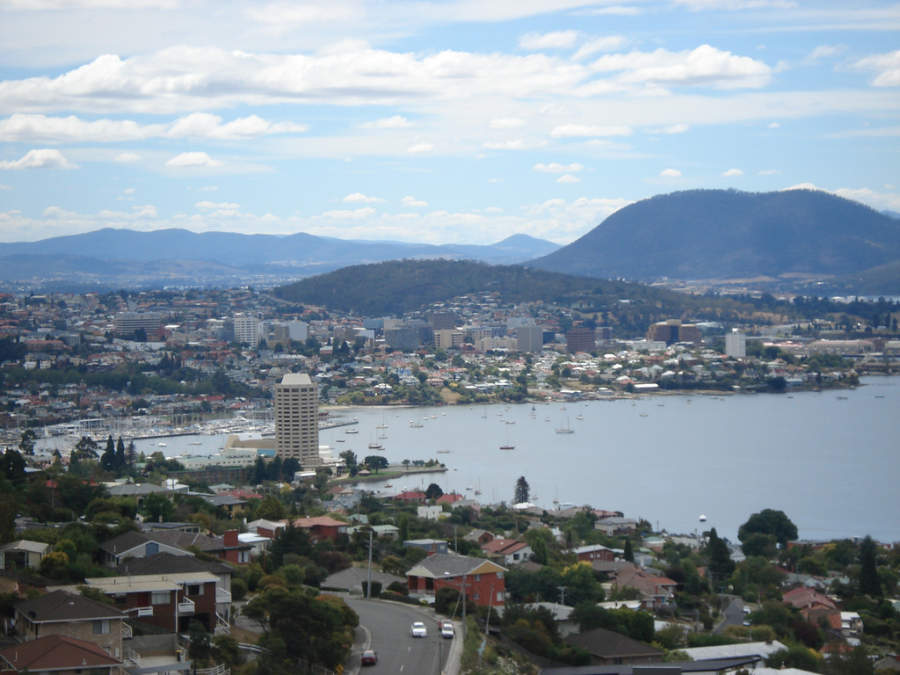 The capital and most important city in the state of Tasmania, southeast of Australia, and one of the oldest ports in the country

Salmon It is sealed on both sides and enjoyed almost raw.

Wasabi Condiment of spicy flavor that is prepared with soy sauce.

Cheese, wine, and fish are the main ingredients in the gastronomy of Hobart.
Salmon in Hobart is famous for having a delicious flavor and unique texture. It is used for a large number of dishes and is prepared in many ways. It can be roasted, baked, and boiled. However, local people prefer it lightly sealed on both sides, almost raw. Other local dishes include all products found on the coast such as lobster, abalone, oysters, and trout. In Hobart, people also eat white creamy cheeses manufactured by the company King Island, and the traditional Japanese 'wasabi', a condiment of spicy flavor that is prepared with soy sauce and is produced on the island.

Due to the location of Hobart and its cool climate, the city has been able to produce a large amount of wines with distinct flavors to the wines in the rest of the country. The main grapes in the region are Pinot Noir, Chardonnay, and Sauvignon Blanc. All are distinguished by its high acidity and good quality.

Hobart has several restaurants specialized in seafood and fish. Most of them are in the areas of Salamanca and North Hobart. One of them is Mures Fish Centre, located on Victoria Dock, where you can try the products of the most characteristic sea products of the region while you admire the ocean.
More detailsLess details

The weather in Hobart, Australia

Spring (September to November): the days are temperate in spring with moderate rains and an average of six hours of intense sunshine. Temperature rises quickly from 6 °C (43 °F) at night in September, to 18 °C (64 °F) during the day in November. The average temperature in spring in Hobart is 12 °C (54 °F). It rains about 15 days a month, accumulating 56 mm (2.2 in) of precipitation. You should bring pants, long and short-sleeved shirts, a sweater, a heavy jacket to wear at night, gloves, and a scarf. Don't forget to bring a raincoat or an umbrella. Summer (December to March): summer in Hobart is quite moderate, with warm days with seven hours of intense sun. The average temperature is 16 °C (61 °F), with highs reaching 22 °C (72 °F) and lows of 11 °C (52 °F). Rainfall intensity decreases slightly but there are more rainy days, with an average of 48 mm (1.9 in) of rain in 11 days. You should pack light clothes for the day as cotton shirts and linen pants, a sweater, jeans, and long-sleeved shirts to wear at night. You might also include a raincoat or umbrella, comfortable shoes, a hat or cap, and sunscreen. Fall (April and May): during this season the temperature drops and rainfall is moderate. The days have from four to five hours of sunlight with an average temperature of 12 °C (54 °F). The highest temperature in fall is 17 °C (63 °F), while the lowest is 7 °C (45 °F). The average monthly precipitation is 49 mm (1.9 in) in 13 days. You should dress in layers with pants and shirts so you can put on a sweater and then a thicker jacket. At night you may need wool socks, a scarf, and gloves. Winter (June to August): these months in Hobart are moderately cold with an average temperature of 8 °C (46 °F). July is usually the coldest month, when the thermometer reads 4 °C (39 °F). August, by contrast, records temperatures of up to 13 °C (55 °F). Like the rest of the year, the winter has moderate rainfall in 15 days a month, accumulating 53 mm (2.1 in) of precipitation. The sun shines intensively during four or five hours per day. You should include corduroy or wool clothing to stay warm, a coat, a scarf, gloves, a raincoat or umbrella, and comfortable shoes.
More detailsLess details

Hobart is the capital and main city of the state of Tasmania, in the southeastern part of Australia, one of the most remote states of this country, known for its extensive natural parks and preserved areas inhabited by the famous marsupial known as the "Tasmanian devil." This is Australia's second oldest city after Sydney. It was founded in the estuary of the Derwent River, on the slopes of Mount Wellington, which makes it a strategic port for expeditions to Antarctica and the state natural parks.

This city features tourist attractions such as Salamanca Place in the vicinity of the port, where you can find restaurants, art centers, 19th century buildings, and a market with local products. Hobart has also a beautiful botanical garden withan area of 14 hectares (34.6 acres) founded in 1818, and the Tasman Bridge, one of the city's main symbols.

Other destinations in Tasmania