Book an hotel at: Ketchikan,United States 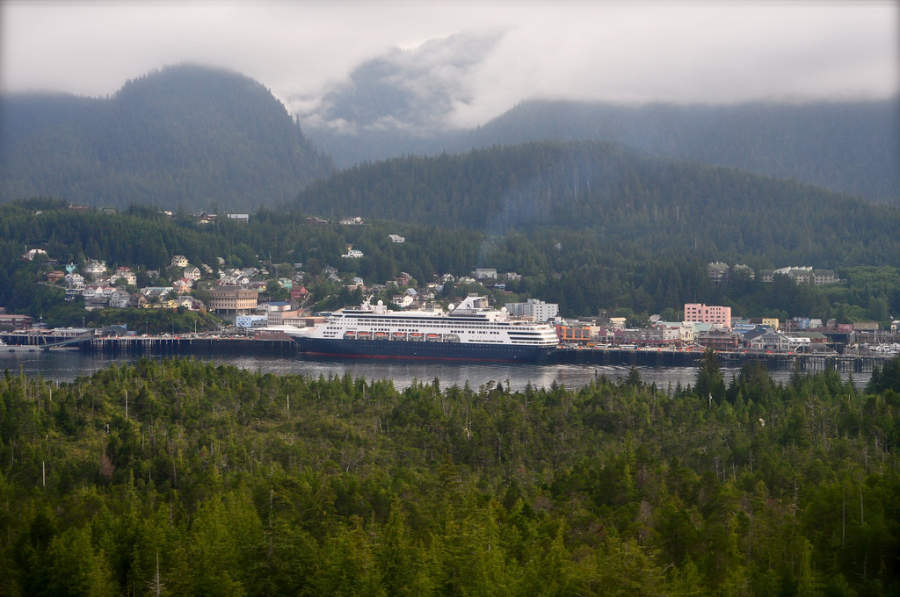 Known as the "Salmon Capital" due to its long fishing tradition, it is one of the best places in southern Alaska to explore nature

Venision Parmesan A dish made of venison with mozzarella cheese.

Ketchikan offers a fresh cuisine. Ingredients such as fish and seafood, and some vegetables and berries create a cuisine that is hearty, simple and full of delicious flavors.
The dishes you can taste include "Venision Parmesan," a dish consisting of deer meat floured, fried in butter and oil, seasoned with a layer of mozzarella cheese, and bathed in a tomato sauce; "Salmon Pie," a puff pastry pie stuffed with salmon with milk, butter, and Parmesan cheese, complemented with cooked potatoes; and "Crab Casserole," a kind of souffle made with crab, mayonnaise, bread crumbs, hard-boiled egg, onion, and cooked potato cubes, among other ingredients.

Alaska Brewing Company is located in Ketchikan, and offers a variety of beers such as "Alaskan Smoked Porter®," with a robust body and a smoky flavor, made with five different kinds of malta.

A very representative dessert of Ketchikan is "Alaska Baked," made with ice cream on a cake base, covered with meringue, which is baked for a short time, to avoid that the ice cream melts. The dessert was created to celebrate the purchase of Alaska by the United States.
More detailsLess details

The weather in Ketchikan, United States

Ketchikan has an oceanic climate with abundant rainfall throughout the year, accumulating 3,597 mm (11 inch) in 229 days. There are snowfalls from October to May. The average temperature ranges between 4 and 10 °C (39-50 °F), with an annual average temperature of 7 °C (44 °F). July and August are the warmest months and January is the coldest.

Spring (April and May): the climate is cold during spring in Ketchikan, there are a few snowfalls and rainfalls are frequent, accumulating 223 mm (8 inch) in 18 rainy days. The temperature ranges between 3 and 11 °C (37-51 °F). April is the coldest month with minimum temperatures of 2 °C (35 °F). We recommend wearing warm pants, long-sleeved shirts, comfortable shoes, a sweater, and a jacket. Summer (June to September): summers in Ketchikan are temperate with cold nights. July and August are the warmest months, with maximum temperatures of 18 °C (64 °F). The average maximum temperature is 17 °C (62 °F) and the minimum is 9 °C (48 °F). Rainfall is frequent in this season, accumulating 233 mm (9 inch) in 16 days. We recommend bringing an umbrella or raincoat, wearing a jacket, pants, and waterproof shoes with non-slip sole. Fall (October and November): the temperature decreases in this season in Ketchikan, reaching a maximum of 8 °C (46 °F) and a minimum of 2 °C (35 °F). Snowfalls start, especially at the end of the season, and rainfall becomes more frequent, with an average of 23 rainy days per month. We recommend wearing wool or thermal clothing, a coat, a sweater, and waterproof boots, and bringing an umbrella. Winter (December to March): the climate is cold in Ketchikan, reaching a minimum temperatures of -1 °C (30 °F) from December to February. The average temperature ranges between 0 and 5 °C (32-41 °F). Snowfalls are frequent, with up to 18 cm (7 inch) of snow, and rainfall decreases to 20 days. We recommend wearing a coat, a scarf, gloves, snow boots, as well as wool or thermal clothing.
More detailsLess details

Ketchikan is one of the most populated places in southern Alaska and is known as the "Salmon Capital of the World" due to its long fishing tradition. This port is surrounded by a beautiful natural environment that can be admired by hydroplane or kayaking, or in an all-terrain vehicle or walking around. Near Ketchikan, you can know more about the native culture and observe wood carved totems.

Other destinations in Alaska