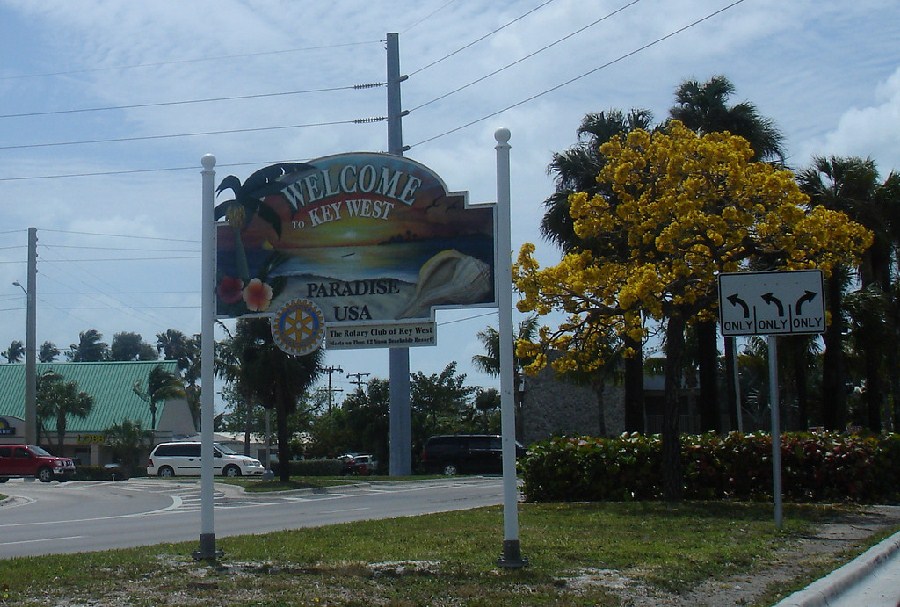 It has been a refuge for pirates, writers, and presidents along its history. The southernmost tip of the United States is nowadays one of the most exclusive destinations in South Florida, with museums, bars, and restaurants.

Key Lime Pie Pie made of Mexican lime and served with whipped cream.

Key West has a wide variety of restaurants and bars whose menus reflect the local preference for seafood, including conch, grouper, and mahi-mahi.
If you love seafood, you can savor a wide variety of dishes in Key West. Some of the most popular delicacies of this destination include Nordic shrimp, farmed around a set of islands called Dry Tortugas, located west of Key West. This sweet shrimp is served in every conceivable way: grilled, baked, fried, or roasted. You can try dishes with crab claws, lobster, and yellowtail snapper, plus sandwiches, "mahi-mahi" tacos, crab cake, and a variety of fruits and vegetables imported from all over Florida, including plantains and black sapote. Local residents also enjoy eating conch, a giant marine snail that lives in the depths of the Gulf of Mexico and that is consumed in various forms, as in ceviche, battered, and fried.

Meals in Key West are usually accompanied with all kinds of fresh drinks, such as wine, liquor, and beer. However, the most popular beverage is pina colada and it is not unusual to see people walking on the street with one of these on hand.

After lunch, remember to try the most famous dessert of this destination, which is key lime pie. The authentic key lime pie is made with Mexican lime, which why it is yellow. It is served with whipped cream in many restaurants.

Key West is known for its numerous restaurants that attract award-winning chefs and culinary stars from the most prestigious schools in the country. You should make a stop at Blue Heaven, since according to local people, it has the best key lime pie in town.
More detailsLess details

Key West has a tropical savanna mild climate with temperatures relatively constant throughout the year. Higher temperatures and more precipitation occur between April and October, while the climate es dry and cool the rest of the year. The annual average temperature is 25 °C (77 °F), with average rainfall of 986 mm (38.8 in). The highest temperature ever recorded in Key West was 38 °C (100 °F), between June and August 1880.

Rainy season (May to October): these months in Key West are the rainiest, especially in the morning. There are occasional thunderstorms and high temperatures of 30 to 32 °C (86 to 90 °F). Rainfall is heavy during these months, especially in August and September, with average rainfall of 138 mm (5.4 in). Hurricanes are rare, but when they occur, they bring abundant precipitation. You should pack flip-flops or non-slip shoes with rubber soles, an umbrella, and a rain jacket. Dry season (November to April): the dry season in Key West lasts from mid-November to April. These months have little rainfall, lots of sunshine, and cooler temperatures ranging from average lows of 21 °C (70 °F) to average highs of 26 °C (79 °F). Remember to pack casual, fresh, and light clothing made of natural fibers such as cotton. We suggest you to include a swimsuit, sunglasses, and sunscreen in your luggage, as well as a light sweater for the cooler evenings.
More detailsLess details

Key West is known in Spanish as Cayo Hueso, and it is the southernmost part of the contiguous 48 states, located even closer to Havana, in Cuba, than than to Miami. During the Spanish conquest and colonization, explorer Juan Ponce de León, known for his expeditions in search of the fountain of youth, found this island full skeletons of the inhabitants, since they used it as a cemetery.

Like most of the New World's islands, Key West has been the stage of pirate legends and hidden treasures; centuries later, it became famous for being a place for relaxation used by several US presidents, who come to enjoy its tropical climate and isolation, having a single road that links with Miami and the rest of the United States. This island has become an exclusive destination in South Florida for snorkeling lovers and who are looking for beaches and quiet seaside places.

Most tourist attractions can be found in Old Town, the historic center of the city, where buildings that date back to late 19th and the early 20th century, are still preserved. One of the most famous buildings is The Ernest Hemingway Home & Museum, where this renowned American writer, author of The Old Man and the Sea, lived for many years; it is today a beautiful place open to the public, which can be used to celebrate weddings.

Key West also features Duval Street, which crosses the island from north to south, up to the shores of the Gulf of Mexico, on a road full of shops, bars, and restaurants. On the north side of this street you can find Mallory Square, adjacent to the cruise port, which annually hosts the Sunset Celebration, an art and entertainment fair.