Book an hotel at: La Paz,Mexico 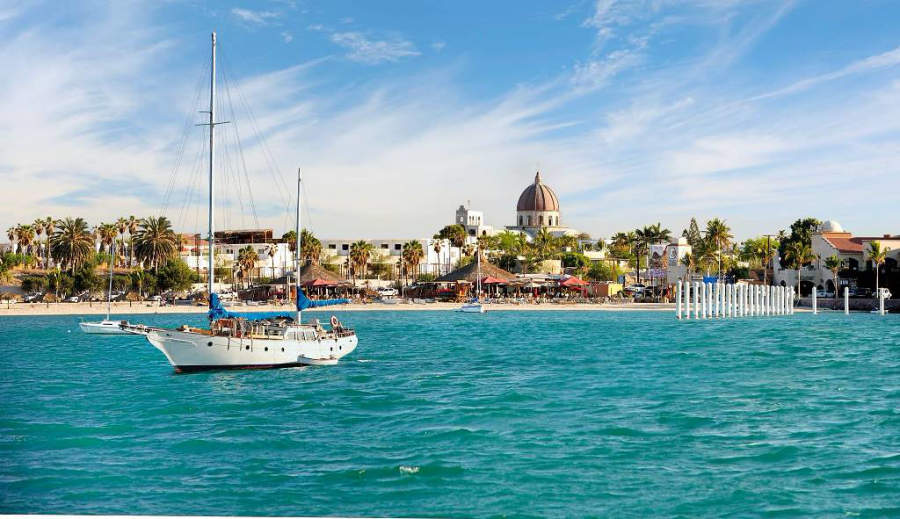 Shrimp stuffed with cheese or seafood, usually crab, breaded, and served with different types of dressings.

Beverage made of the distillate of damiana herb, sugar cane alcohol, water, and sugar.

Sweet made of dates cooked with honey and sugar.

The cuisine of La Paz is mainly based on the use of seafood due to its high fishing activity; however, it is not limited to this, since there are other dishes typical of the north of the country, such as machaca de carne (ground jerky). Some of most commonly used spices in local cuisine are oregano and damiana, the latter is wild plant that is said to have aphrodisiac properties. Among the main dishes of the region are marinated clams, prepared with lemon and orange juice, poblano chili, olive oil, and spices; the imperial shrimp steak, a sort of shrimp wheel surrounded by bacon and grilled; shrimp stuffed with cheese or another seafood; callo garra de león, and kind of lobster prepared with red onion, serrano chili, cucumber, lemon juice, salt or olive oil; and lobster, in several ways.

To accompany any of these delicacies, you cannot miss the date liqueur or grape wine. Also, you should try the sweet liqueur prepared with the damiana herb.

A variety of jams such as guayabate (guava and sweetened with brown sugar), mangate (a mango jam), and pitahayate (a pitaya sweet), are the most typical sweets or desserts of this region, along with dates and papaya in syrup. As in most of the north of the country, you will find cheese patties, French toasts, and dehydrated fruits as white fig and mango.

To enjoy these delicious dishes and many others, you can visit the Brisas del Mar restaurant or Mariscos Los Laureles, another excellent option for enjoying delicious specialties made with shrimp and octopus.

The weather in La Paz, Mexico

The climate of La Paz is arid, with over 300 days of sunshine per year, almost no rainfall, and an annual average temperature of 23 °C (73 °F)

Rainy season (August and September): with such a dry and arid climate, the rainy season in La Paz means an average of four rainy days a month. Rains are minimal; however, they can be heavy. Temperatures reach 36 °C (36 °F) or more, with some humidity. Nights are warm with an average of 23 °C (73 °F).

Dry season (October to July): these months in La Paz are usually dry, warm, and sunny. Daytime temperatures do not vary much from the rest of the year. The warmest month is July, with highs of 37 °C (99 °F), just before the rains come. December, January, and February are the coldest months, with nocturnal lows of 10 °C (50 °F).

We recommend bringing clothing made from natural fibers such as cotton, as well as a cap or a hat, sunscreen, sunglasses, your swimsuit, and an extra towel. For the colder months, we suggest packing a sweater or a jacket. Be sure to include an umbrella or a rain jacket in your luggage. During summer evenings, the Coromuel winds from the Pacific Ocean blow into the bay.

La Paz is a beach destination surrounded by desert, in the Mexican state of Baja California Sur. The city is by the Sea of Cortez, which was named the Aquarium of the World by explorer Jacques Cousteau due to its immense biological richness. The city is 202 kilometers (125.5 mi) from Cabo San Lucas and 81 kilometers (50.3 mi) from the Magical Town of Todos Santos.

The main charm of La Paz lies in its magnificent beaches, such as Tecolote, Pichilingue, Coromuel, Caimancito, and Ventana, among many others. This important tourist destination features a variety of natural attractions, including the islands of Espíritu Santo, Partida, and Cerralvo, which are ideal for diving and snorkeling. The first two were declared Biosphere Reserves in 1995, as they are home of about 300 sea lions and other 11 species that only exist in that place. Also, there is the Sierra de la Laguna Biosphere Reserve, ideal for ecotourism.

Magdalena Bay, within 2 and a half hours of La Paz, offers various adventure activities, such as tours through the dunes and the mangroves, which are habitat of various species of birds as ospreys, diving ducks, frigates, gulls, herons, white ibis, and blue herons. In addition, you can visit a sea lion colony and go camping. One more reason to visit La Paz is the sighting of gray whales from January to March, mainly in the Ojo de Liebre Lagoon, Guerrero Negro, the San Ignacio Lagoon, and Magdalena Bay. If you love animals, the ideal season for you to see whale sharks, and even swim with them, is from September to April.

This destination is ideal for sport fishing, since it has great variety of species such as swordfish, blue and black marlin, tuna, and gold fish, among others.

La Paz houses important remains of its historical and cultural past, such as the Cathedral of Our Lady of Peace, by the main square and the Velasco Garden. You should visit the Regional Museum of Anthropology and History of Baja California Sur, the botanical garden, and Serpentarium of La Paz, which has the largest collection of reptiles of Mexico. At the Profesor Jesús Castro Agúndez Cultural Center you can visit the Carlos Olachea Boucsiéguez Art Gallery, the City Theatre, and the Museum of the Gray Whale.

Nightlife in La Paz mainly takes place on the Álvaro Obregón Boardwalk, where you will find hotels, restaurants, nightclubs, bars, and specialty shops. In this area you can enjoy a relaxing walk to see the sunset, when the sea is painted in red shades, and you can hear live music on weekends. The boardwalk features various sculptures that adorn it, including the Jesus of the Seashell, the Magical Snails, and the Queen of the Sea, among others.

Some of the most important festivals of this destination are the Art Festival of Todos Santos in February, the Carnival of La Paz in February and March, the International Festival of Arts and Culture for Peace in March and April, the commemorative celebrations of the Foundation of La Paz and the Mango Festival in May, the Mexican Independence Day in September, and the Day of the Virgin of Guadalupe in December.

Other destinations in Baja California Sur