Book an hotel at: Liberia,Costa Rica 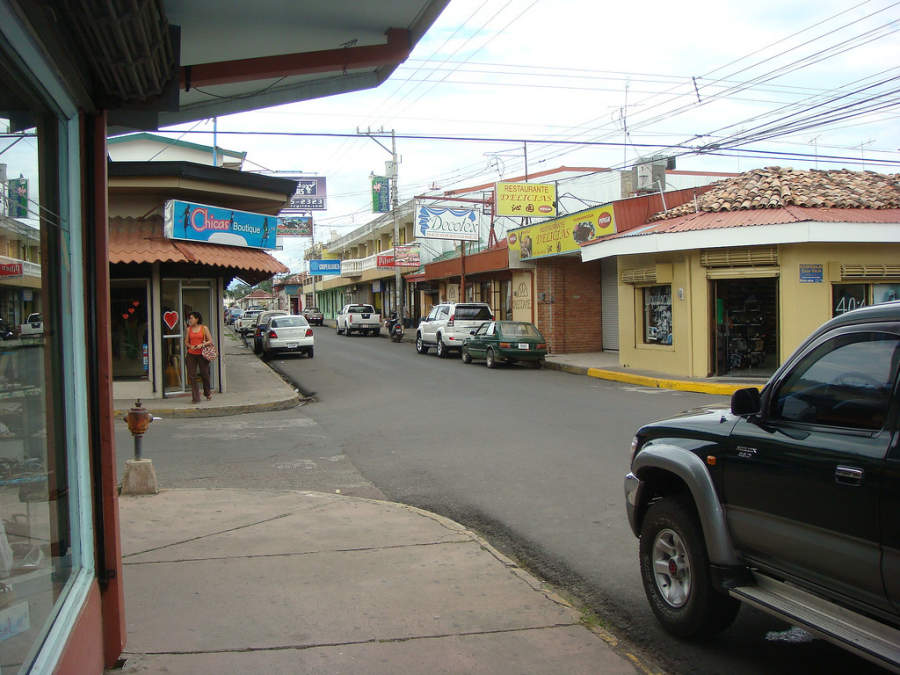 Being the capital of the province of Guanacaste, Liberia offers historic and cultural attractions, and it is the gateway to the surrounding natural parks and beaches of Costa de Oro

Snack or dessert consisting of shaved ice covered in a flavored syrup.

Liberia has restaurants that prepare from international cuisine to traditional regional stews, fast food establishments, and street stalls where you can enjoy typical snacks

In Liberia you can try typical dishes mainly in the market. At street stalls you can find jugo de caña (cane juice), copos, a dessert consisting of shaved ice covered in different flavored syrups, and even a beverage made with chicha (corn beer) and brown sugar, that is usually offered during the tradition called Pasada del Niño Dios (The Moving of Child Jesus). Visit the Paso Real restaurant, with views of the central park, and enjoy international cuisine at Copa de Oro, Jauja, Restaurante El Pilón, and Café Liberia. Casa Verde prepares Asian Californian fusion dishes, while Los Comales serves regional cuisine. The specialty of El Pochote is pork cracklings and fried pieces of pork meat, while El Zaguán serves steaks, and Sabor Parrillero offers dishes made in a stone oven. The Pizza Pronto and La Toscana restaurants are ideal for tasting Italian stews; while Pan y Miel and Panadería Alemania are the right place for enjoying baked delicacies. Also, there are establishments such as Jumbo Supermercado or SuperCompro to acquire different types of foods, and fast food restaurants such as Guanaburger and Burger King.

The weather in Liberia, Costa Rica

Liberia has a typical tropical savannah climate, with an average temperature of 28 °C (82 °F). Rains accumulate 1,661 mm (65.4 in) of precipitation, having the heaviest rainfalls between May and November

Liberia is quite hot; the temperature remains over 30 °C (86 °F) during the day, with night lows are never below 20 °C (68 °F). December and January bring the lowest temperatures of the year, recording 21 °C (70 °F), while April reaches up to 36 °C (97 °F). From December to April, rains are very light, which abruptly intensify in May, when they exceed 190 mm (7.5 in) of rainfall on average. Precipitations remain very strong until November, but the most abundant rains come in September, with an average of 364 mm (14.3 in).

You should wear Bermuda shorts, T-shirts with or without sleeves, light colored clothing preferably made of fabrics like cotton that will help keep you to stay cool, a hat or a cap, sunglasses, comfortable shoes, and sunscreen. For the rainy season, remember to bring an umbrella or a rain jacket, as well as waterproof shoes.

Liberia, nicknamed the white city, is the capital of the province of Guanacaste, Costa Rica, and it is the gateway to the fabulous beaches of the Gulf of Papagayo and the area called Costa de Oro, where Daniel Oduber Quiros International Airport (LIR) is located.

In this quiet and small town, the colonial atmosphere is mixed with modern buildings, standing out the buildings made of bahareque and adobe. Visit the Chapel of Agony, that has a clay tile roof and adobe walls; the Church of the Immaculate Conception, which rises opposite Mario Cañas Ruiz Park, featuring a countryside-style wooden gazebo; and the Chapel of Mercy, dating back to the 1920s. Other historic buildings include the Old Government building with over 150 years of history, the Military Headquarters of Liberia, the Zúñiga Clachar House, the Ascensión Esquivel Ibarra School, and the mansion of Hacienda El Jobo, which is a representative of the old-time ranches.

Walk along Calle Real, a street lined with colonial buildings, admire the houses with sungates, consisting of two doors at the corners of the property; and contemplate the statue of Sabanero, with a poem by Rodolfo Salazar Solórzano. Also, you can learn about the livestock history of the country in the Sabanero Museum, and visit the Museum of Religious Art and the Museum of Guanacaste, which is actually a former prison that occasionally features concerts.

Liberia features Spanish schools, Edgar Briceño Stadium, and Mall Centro Plaza Liberia, housing movie theaters. Africa Safari, an adventure natural park with animals in open spaces and with a waterfall, is located on the outskirts of the city. The most important celebration of the city of Liberia is the Day of the Annexation of Guanacaste to Costa Rica, on July 25. During the first week of September, the Cultural Week takes place, with activities such as music, dance, samples of regional art, and tastings of typical food and drinks. On December 24 the tradition known as the Movement of Child Jesus is celebrated. In addition, the National Band of Guanacaste offers concerts every Friday and Sunday night, and there are rodeos, folk dances, and sporting events throughout the year.

You can find natural attractions in the surroundings of Liberia, such as Llanos del Cortés Waterfalls, the rapids of the Tenorio and Corobicí rivers, the canyon formed by the Liberia River, and Del Coco Beach, which is the closest beach. Other attractions include Rincón de la Vieja National Park, whose areas comprise the Rincón de la Vieja active volcano and several hot springs; Santa Rosa National Park, that houses some of the best surfing beaches in the world; and Hacienda Santa Rosa, which is one of the oldest in the country; and Guanacaste National Park, that shelters extensive areas of forest and savannah.

***The official currency of Costa Rica is the Costa Rican Colón (CRC).

Other destinations in Guanacaste