Book an hotel at: Memphis,United States 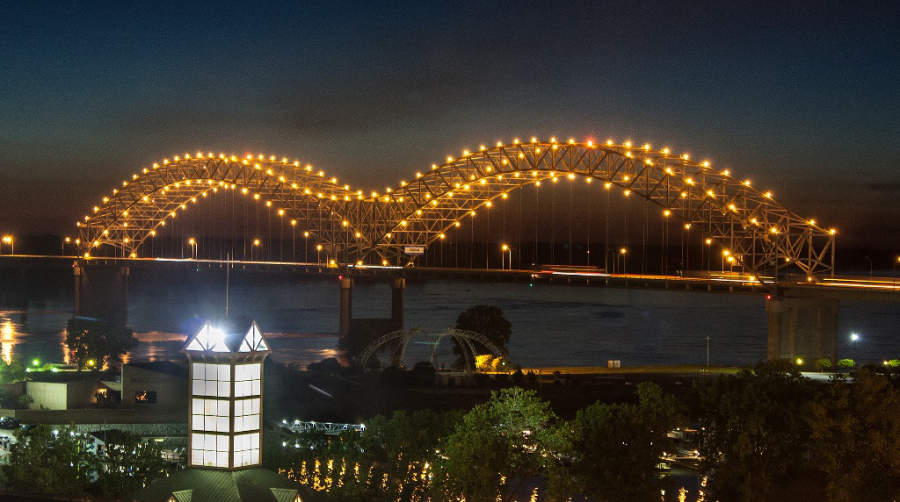 Memphis, located in the southern state of Tennessee, is a city that played a fundamental part in the history of musical genres such as blues, soul, and rock and roll

Grilled pork ribs dipped in a BBQ sauce made with a base of tomato sauce, honey, chili, and spices.

Battered pieces of chicken fried in oil. In the Southern United States they are eaten with mashed potatoes and coleslaw.

Cajun dish that consists of rice, chicken, ham, prawn, and plenty of pepper.

Shrimp sauteed with pepper, garlic and onion. They are served on a base of rice, covered in tomato sauce.

Fermented alcoholic beverage made from barley.

The cuisine of Memphis is based on southern cuisine, being BBQ-style dishes the insignia of the city

In Memphis, the dish most recommended by locals is BBQ pork ribs, and you can try them at Corky's BBQ or at Central BBQ. If you want an authentic Southern dining experience enjoy this dish during the Memphis in May festival. You can enjoy them with a cold beer, as it is traditionally done in this city.

Try dishes from the Southern United States at Gus's World Famous Fried Chicken and eat the traditional fried chicken with mashed potatoes, beans, and coleslaw. If you are looking for Cajun and Creole cuisine, like a bowl of jambalaya or shrimp creole, then you cannot miss Deja Vu: New Orleans Creole Soul Food & Vegetarian Restaurant.

The weather in Memphis, United States

Memphis has a humid subtropical climate. Summers are hot, with an average temperature of 30 °C (86 ºF), while winters are cold, with days of approximately 5 °C (41 ºF)

During summer, June to September, the thermometer ranges between 28 °C and 32 °C (82.4 and 89.6 ºF). If you are traveling in this season, we recommend you to wear fresh and light clothing; shorts and t-shirts made of cotton are a good choice. Do not forget to bring sunglasses, a hat, and a rain jacket, since rains are constant in these months.

Winter months, December to February, are cool with a tendency to be cold. The average temperature is 5 °C (41 !F), so it is best to pack long pants, a warm sweater, and a heavy jacket. Memphis has occasional snowfall.

Memphis is a musical destination par excellence, also known as the Blues City or the Rock and Roll Birthplace. This city witnessed the success of stars such as Elvis Presley, Jerry Lee Lewis, Johnny Cash, and Aretha Franklin. Memphis’ musical culture is undeniable; in fact, one of the main attractions in the city is Beale Street, lined with restaurants and nightclubs, where great interpreters of blues and soul were discovered.

An obliged landmark is Sun Studio, where rock and roll was born and where Johnny Cash and Elvis Presley made their first recordings. Other important sites include the Stax Museum of American Soul Music and the Memphis Rock 'n' Soul Museum. You must definitely visit Graceland, the house where Elvis Presley lived until his death.

Memphis was an important part of the African-American Civil Rights Movement, which is why it is home to the Civil Rights Museum, located just off of the Lorraine Motel, which became famous for being where Martin Luther King Jr. was assassinated.

Learn about the lifestyle of Memphis at the Center for Southern Folklore or visit the city in May and be part of Memphis in May, a festival of music and food where you can eat meat BBQ-style meat, which according to locals is the best in the Southern United States.

Don’t miss Shelby Farm, an urban park five times larger than Central Park, and the Memphis Zoo and Aquarium, which is home to species such as pandas, polar bears, penguins, and seals. The Hernando de Soto Bridge links Memphis with Arkansas City, the Orpheum Theatre, the FedEx Forum, and the Pyramid Arena.

Other destinations in Tennessee