Book an hotel at: Merida,Mexico 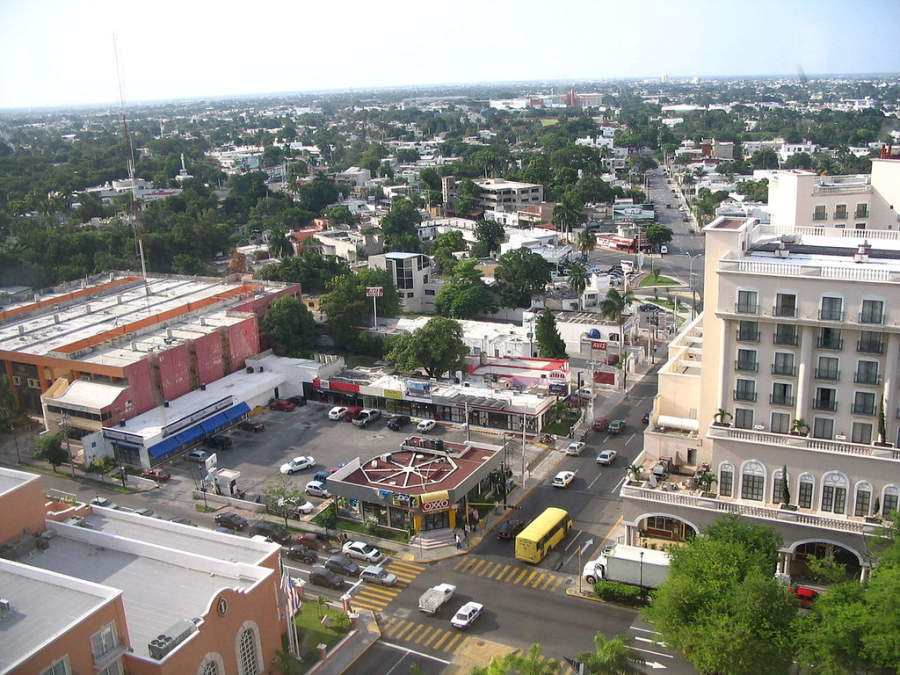 Merida is a city with a colonial atmosphere, where it is possible to perceive the historical legacy of the Mayan culture

Chicken or pork dish cooked over the grill, seasoned with bitter orange, onion, and oregano.

Gastronomy in Merida consists of the traditional Yucatecan dishes, where ingredients such as chicken, pork, achiote, beans, and habanero pepper are always present

Merida is a traditional city with a historic legacy of the Mayan civilization. Its culinary offer includes restaurants of different specialties. However, without any doubt, the cuisine from Yucatan is the most representative of the city. Although there are numerous options, the most popular dishes are:

Cochinita pibil, this typical Yucatecan dish consists of pork prepared with bitter orange and achiote, wrapped in banana leaves and cooked in the oven. It is served with red onion in lemon juice and sliced habanero pepper.

Panucho, is a typical snack that consists of a fried corn tortilla stuffed with beans, served with roasted chicken, tomato, avocado, and red onion. It is accompanied by habanero sauce, commonly used in the southeast area of Mexico. This dish and other snacks from the Mexican state of Yucatan are served at Eladio’s restaurant.

Sopa de lima, is a kind of chicken soup with a light taste of lime. It is prepared with shredded chicken, fried corn tortilla, tomato, and onion. If you want to try it, go to Hacienda Teya restaurant.

Poc-Chuc, is one of the most famous dishes in the cuisine from Yucatan, that consists of pork or chicken meat cooked over a grill and seasoned with bitter orange, oregano, thyme, and onion. If you wish to try it, we recommend you to go to Los Almendros restaurant.

Marquesita, is a sweet snack that consists of wheat flour cooked until it becomes crispy. It is filled mainly with Edam cheese, but you can have it with jam, milk caramel, or Nutella®. You can try it at most of the street food stalls around the city.

Other dishes we recommend you to try are the salbutes, which are similar to the panuchos, but without the beans; and the papadzules, elaborated with corn tortillas filled with boiled eggs, dipped in a sauce of pumpkin seeds. Other traditional meals include relleno negro, prepared with turkey and recado negro, which is a Mayan seasoning; and the famous queso relleno, prepared with Edam cheese and ground meat.

Regarding beverages, you can try the Xtabentun, which is a Mayan liquor made with fermented honey from the bees that feed from the xtabentun flower; or the Leon and Montejo beers, that are originally from the city.

The weather in Merida, Mexico

The weather in Merida is warm and humid during the whole year. In the hottest days of spring and summer, temperatures can reach 40 °C (104 °F), and during winter, th weather can turn cool, reaching 17 °C (62 °F)

Merida is a hot and humid city with an average temperature of 27 °C (80 °F). The hottest days are during spring and summer, and temperatures can reach 40 °C (104 °F). If you are traveling in these dates, we recommend packing sunglasses, a hat or a cap, and light cotton or linen clothes, since they are very cool. During fall and winter, the weather is cooler but not cold, with low temperatures of 17 °C (62 °F) and in this case, you can bring a light sweater if necessary.

Merida is a city with a humid weather, where there can be light to heavy rains throughout the whole year. However, from August to October, precipitations are more common. Due to its proximity to Puerto Progreso, there may be tropical storms, so bring a small umbrella in your luggage just in case.

What to expect from the weather at Merida

Merida is a colonial city founded in 1542 by conquistador Francisco de Montejo; it was named after the Spanish territory of Merida. Merida is located in the Mexican state of Yucatan, in southeast Mexico, and it was built over the remains of Ichcaanziho oT'Ho, an important city of the Mayan civilization, reason that explains the great presence of this culture in the traditions of Merida. Merida is also known as the "White City", due to the white buildings found by the Spaniards when they arrived; however, there is another version saying that the name is because the Spaniards wanted to make this place exclusively for white people.

The city had its splendor during the heyday of the great henequen haciendas in the region. Because of this, most wealthy landowners decided to settle in this city, building French-style large mansions along Paseo Montejo, the main avenue of Merida, whose design was inspired by the streets of Paris, where there are wooded corridors, numerous roundabouts, and monuments. Today, Paseo Montejo is the modern part of the city, an ideal place for tourism since it hosts prestigious hotels (some of them are set within the old mansions), numerous restaurants, bars, shops, and places such as the Monument to the homeland, the Monument to Montejo, and the Monument to Gonzalo Guerrero, considered the "Father of miscegenation."

On the other hand, the historic center is the place to see the more traditional side of Merida. There you can find markets and shops selling crafts, linen clothing, and food; the Main Square, meeting place for local people; the Cathedral of Yucatan, set in the surroundings, which claims to be the oldest cathedral in Mexico; plus Yucatecan restaurants and coffee shops. Other places you can visit include the Hall of history in the Government Palace, which exhibits murals depicting the history of the city; the Fernando Garcia Ponce Museum, exhibiting contemporary art; and the Museum of the Yucatecan Song, in honor of the trova genre that was born in Mérida.

Other prominent places in the city of Merida include the Grand Mayan World Museum, which houses 800 archaeological pieces from the Mayan civilization; the Yucatan Siglo XXI Convention Center, where theatrical shows and artists of the national music scene are presented; Centennial Park Zoo, which features a recreation area with rides; and Altabrisa, the largest shopping center of the city.

Merida is a starting point to visit places such as Puerto Progreso, and the archaeological sites of Uxmal and Kabah and Chichen Itza, whose main pyramid is considered one of the "New Seven Wonders of the World". In addition, in the surroundings of Merida you will find a great number of sink holes of crystalline waters, where you can go swimming or snorkeling.

Other destinations in Yucatan