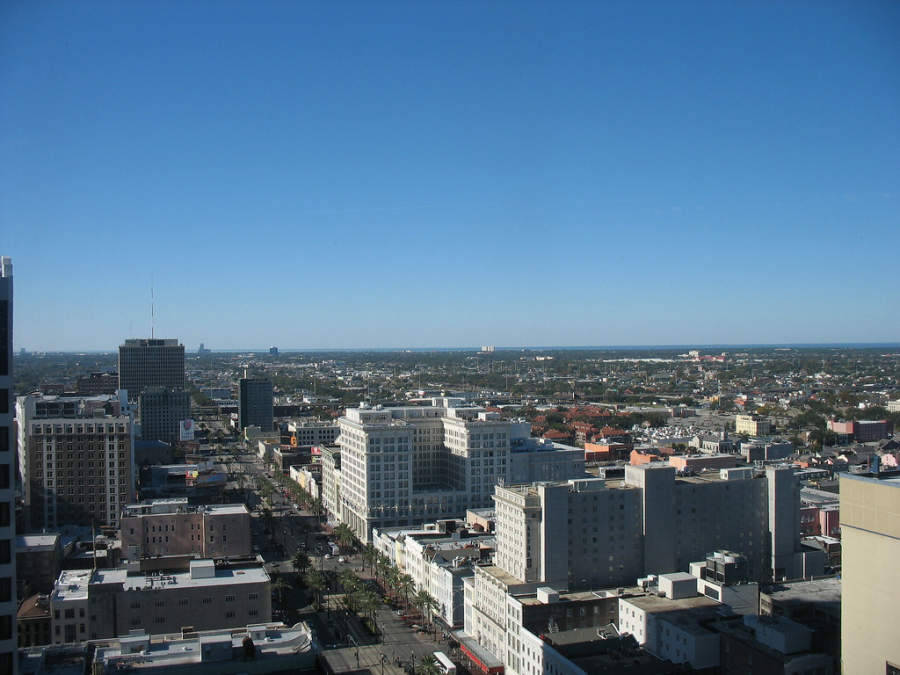 New Orleans is the jewel of the southern state of Louisiana. The Mardi Gras city is located in the mouth of the great Mississippi River

Jambalaya Typical dish very similar to the Spanish paella, which is prepared with chicken, seafood, and chorizo.

Traditional Creole shrimp dish with a delicious sauce based on vegetables and Tabasco sauce.

Sandwich prepared with Italian cheese and sausages smeared with a delicious sauce of black olives.

New Orleans is known as the most delicious city in the United States, melting pot of culinary influences and regional ingredients that together create unique and unrepeatable flavors and aromas

New Orleans features a mix of cuisines from around the world, including African, French, Spanish, and Latin American, resulting in two culinary cultures: the Creole and Cajun.

The Cajun cuisine is based on the use of local and simple ingredients as rice, shrimp, and freshwater fish; it has also been strongly influenced by the French cuisine and its traditions, including the use of roux, with butter and flour as the base for sauces; and mirepoix, consisting in a combination of vegetables, mainly carrots, onions, and celery to flavor sauces and soups.

Among the main dishes of the delicious Cajun cuisine in this destination you can find the etoufflé, based on river prawns, crab, and shrimp; the jambalaya, a dish very similar to the Spanish paella, with chicken, seafood, and sausages; and the delicious gumbo, a spicy soup with chicken or seafood thickened with the traditional okra, fruit originally from Africa; or the cochon au lait, roasted piglet.

Creole cuisine was also influenced by the Caribbean, African, Mediterranean, Italian, and American cultures. Although very similar, creole cuisine is more sophisticated, and among its entrees, it is worth mentioning shrimp creolé, shrimp covered in a delicious sauce made with onion, tomato, celery, pepper, and Tabasco sauce; muffuletta, a sandwich prepared with Italian cheeses and meats, covered in a sauce of black olives; the delicious Rockefeller oysters, which are topped with cheese, parsley, butter, and bread crumbs; and the banana foster, a delicious dessert based on bananas flamed with rum and sugar, served with vanilla ice cream.

Among the restaurants where you can find delicious specialties of the city are Commander’s Palace, whose executive chef Tory McPhail has several national and international awards; and August by chef John Besh, specialized in French cuisine or Pêche, cataloged as one of the best new restaurants of 2013, serving seafood specialties.

The city of New Orleans is surrounded by water, having a sub-tropical humid weather

Summers in New Orleans are long, hot, and humid. July and August are the hottest months with an average high temperature of 33 °C (91 ºF). At night, temperatures drop down to 19-23 °C (66-73 ºF). It usually rains in the afternoons, and in some cases storms may occur. We suggest bringing a hat, sunscreen, biodegradable repellent, sunglasses, natural fiber clothing, and comfortable shoes, as well as an umbrella or a raincoat.

December, January, and February are the coldest months in New Orleans, with an average maximum temperature of 18 °C (64 ºF) and a minimum of 6 ºC (42 ºF). The climate is humid, and fog cools down the apparent temperature. Remember to bring an umbrella or a raincoat since it usually rains throughout the year, and to pack warm clothes for the cool nights.

New Orleans is one of the most fascinating cities in the world, blend of Spanish, Latin-American, French, and American cultures. Creole houses, plantations, big mansions, cast iron fences, balconies, and steamships are characteristic of this destination.

The city was founded in 1718 by French colonists to create a trade route with the native Americans that established their stores between the Mississippi River and Lake Pontchartrain. Nowadays, it has a unique atmosphere, especially during its magnificent Mardi Gras celebration, which marks the start of Lent and the Holy Week season. Two weeks before Fat Tuesday, there are daily parades, where masquerades, carriages, and music that make the city and its visitors vibrate. It is a tradition that the groups that organize the parades throw beaded necklaces and small toys to the participants, practice that dates back to the 19th century.

The French Quarter, the oldest of New Orleans, features architectural richness that portrays its colorful history. It shelters classic hotels, excellent restaurants, places to listen to music, charming boutiques, antique stores, and art galleries. Additionally, it is home of the Cathedral or Basilica of Saint Louis in Jackson Square, historic apartments in Pontalba, residences with many architectural details, and hidden patios. Here you can see artists, tarot readers, street performers, and horse-drawn carriages.

Woldenberg Riverfront Park has been the place to stroll in the city. The park has a large garden with a brick promenade that leads to the Mississippi River. Also, Audubon Park, one of the largest urban parks in the United States, houses one of the best zoos in the nation with sections dedicated to the swamps of Louisiana. In the vicinity you can take boat trips to look for alligators in the Bayou or go kayaking through the marshes.

For shopping you should go to the French Market, the oldest public market of the country and one of the most picturesque places in the city, where you can find typical souvenirs of New Orleans, from Mardi Gras accessories to voodoo dolls or spells for love and passion. Art lovers can go to the Warehouse District to visit the galleries on Julia Street. Fashion fans can explore the chic boutiques on Magazine Street or stroll around the shopping centers as Canal Place.

Nightlife in New Orleans outstands for its jazz music, with dozens of live jazz venues in the city that are allowed to stay open 24 hours where you can have a great time listening to music.

Other destinations in Luisiana