Book an hotel at: Nouméa,New Caledonia 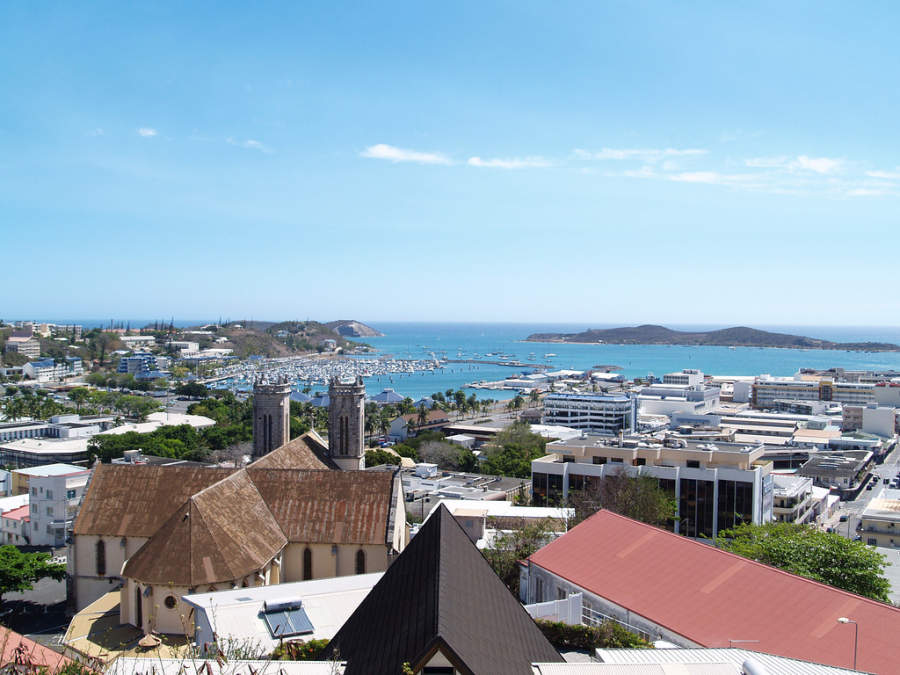 Bougna Rice paste made with vegetables, meat, and fish cooked in an underground stone oven.

Gastronomy in Nouméa is the result of French, Indonesian, Vietnamese, Polynesian, and other influences. Popular ingredients include coconut milk, herbs, rice, meat, and seafood.
"Bougna" is a typical dish from Nouméa prepared from rice paste with pieces of yucca, plantain, chicken, crab, and fish; all wrapped in banana leaves and buried in an underground oven. Once cooked, it is served and eaten with the hands. "Bami" are noodles combined with rice, pieces of meat or fish, red peppers, and onions, among other ingredients. "Nems" are fried rolls made of pasta stuffed with different vegetables cut into strips as carrot, onion, cabbage, and spinach. You can add pieces of pork or chicken and season them with soy sauce.

The best drinks to accompany your dishes in Nouméa are based on tropical fruits such as papaya, lychee, mango, and coconut, among many others. Coffee and beer are options you can also find on the menu.

There is a variety of restaurants serving mostly French cuisine, prepared with the typical ingredients of the region creating a very particular fusion of gourmet cuisine with rustic touches.
More detailsLess details

The weather in Nouméa, New Caledonia

Nouméa has a tropical climate with an annual average temperature of 19 °C (66 °F) and precipitations of 1,058 mm (634.8 inch). Temperatures do not vary much, however the year is divided into two seasons: a dry season with moderate rainfall and a rainy season with abundant rainfall. The city is protected from the tropical winds by the west coast of Grande Terre, although in the rainiest months the climate tends to be humid and muggy.

Rainy season (January to June): precipitation during these months is abundant in Nouméa, raining between 13 and 16 days per month with abundant rainfall that accumulates 115 mm (4.5 inch) per month, ranging from 86 mm (3.3 inch) in May to 135 mm (5.3 inch) in March. There is an average temperature of 25 °C (77 °F) with lows between 18 and 23 °C (73 °F) at night and highs between 24 and 29 °C (75 and 84 °F) during the day. The thermal sensation is high due to the increased relative humidity. The UV index goes from high to extremely high and the sea has a temperature between 24 and 27 °C (75 - 80 °F). We suggest bringing your swimsuit, clothing made of natural fibers such as cotton or linen, comfortable shoes, a rain jacket, sunscreen, sunglasses, and a light sweater for the cool nights at the end of the season. Dry season (July to December): this season in Nouméa has from 9 to 14 rainy days per month, although rainfall is lower in relation to the previous months. The driest month is September with 40 mm (1.5 inch) of precipitation, while December is the wettest with 75 mm (2.9 inch). Days are slightly cooler with an average temperature of 21 °C (69 °F), a low of 17 °C (62 °F) from July to September, and a high of 28 °C (82 °F) in December. The sea records temperatures between 23 and 26 °C (73 and 78 °F). We recommend packing an umbrella, a sweater, and pants for cool evenings in the first months of the season, short-sleeved T-shirts, shorts, and dresses. Remember to bring your swimsuit, sunglasses, and sunscreen.
More detailsLess details

Formerly known as Port-de-France, Nouméa is the capital of the French territory of New Caledonia and the largest French-speaking city on the Pacific Ocean with a varied mixture of cultures and an European atmosphere, featuring beautiful beaches and colonial architecture.

Nouméa is facing the sea and has one of the largest lagoons in the world, offering water activities such as windsurfing, snorkeling, and diving. The historic center is located around the square La Place des Cocotiers and is the most important colonial district with numerous historical monuments such as the Celeste fountain, the musical gazebo, and the Cathedral of San Jose. Next to the square there are several jewelry stores and luxury boutiques.

The Latin quarter is another ancient and tourist area where you will find the territorial museum, the municipal market with local food and handicrafts, as well as restaurants and bars. Port Moselle is the main recreational port of the city and the southern neighborhood is the most tourist area, featuring an aquarium and several beaches on Bay of Lemons.

The history of Nouméa is exhibited in the museum of the city and you can know its culture through the exhibitions and events organized at the conservatory of music, theaters, Tjibaou cultural centre, and the museum of culture. Michel-Corbasson Zoo is home to several endemic species, birds, and exotic animals.

***The official currency of New Caledonia is the CFP Franc (XPF).

Other destinations in Provincia Sur