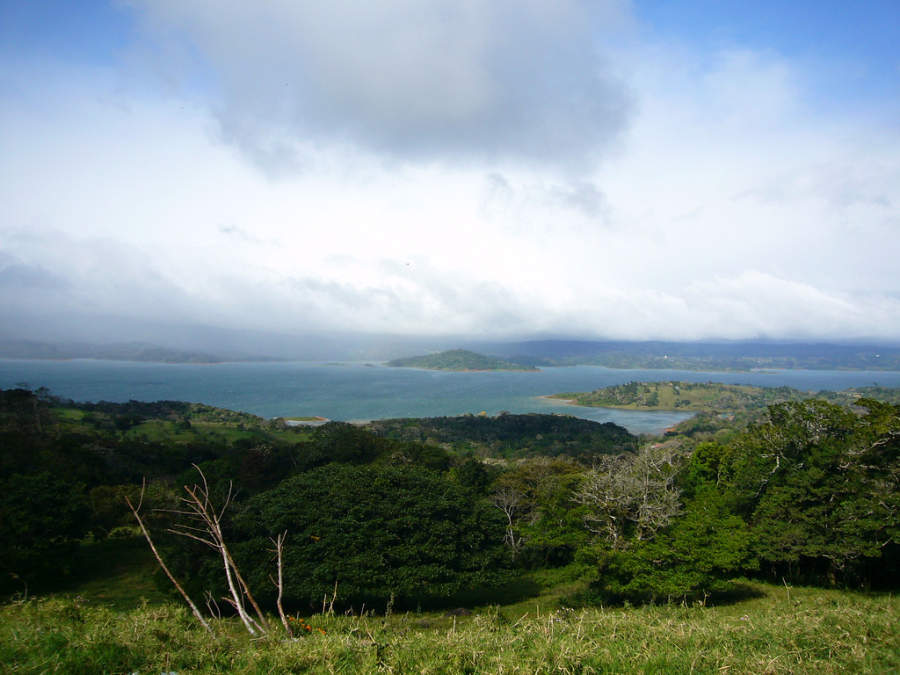 Traditional dish consisting of rice with beans that can be accompanied by fried bananas and even egg.

Nuevo Arenal has several restaurants where you can choose among regional cuisine, American dishes, Italian specialties, and typical German bread

In Nuevo Arenal, German and Italian establishments stand out. Taste Moya’s pizza and visit Tom’s Pan, a very popular site better known as the German bakery, where homemade cakes, strudel, and other baked delicacies are available for sale. Las Delicias restaurant offers pasta, quesadillas, roasted meat, and the typical casado dish; and the Bambú Bar and Restaurant that also prepares the casado and gallo pinto, which is another traditional stew. Taste a smoothie or a cup of coffee at Lava Java or international cuisine in Sunset Grill. Rumors Bar & Grill has an American menu and Tex-Mex cuisine that includes chili and meat, hamburgers, quesadillas, and grilled cheese sandwiches.

Nuevo Arenal has tropical climate classified as equatorial that is characterized by the lack of a dry season, with very abundant rains that in this case reach 2,978 mm (117.2 in) of precipitation per year. The temperature varies little and averages 23 ºC (73 °F)

In general, the rains are very strong in Nuevo Arenal; only from February to March the average rainfall remains below 100 mm (4 in). In March, the rainfall intensifies even more and remains with a very abundant volume the rest of the year, reaching 413 mm (16.2 in) of precipitation in July, which is the rainiest month. The average temperature is quite constant throughout the year. During the day, the temperature reaches between 27 ºC (81 °F) to 30 ºC (86 °F), and at night the lows fluctuate between 17 ºC (63 °F) and 19 ºC (66 °F).

You should bring a rain jacket or an umbrella, rain boots, a hat or a cap, sunglasses, your swimsuit, shirts with or without sleeves, light clothes for the day, and a sweater and a pair of trousers for the night.

Nuevo Arenal is a quiet and picturesque town at the foot of the Arenal Volcano, the most active volcano in Costa Rica that has given the region an important tourist activity, attracting nature lovers. This town is located in the province of Alajuela, next to the artificially-formed Arenal Lake, 28 kilometers (17.4 mi) from the town of Tilarán, and 45 kilometers (28 mi) from the community of La Fortuna. The inhabitants of this town formerly resided in an area to the southeast that disappeared under the water after the creation of the lake in 1973.

Lake Arenal is considered one of the three best places for windsurfing in the world, with ideal winds to practice this sport that attract hundreds of tourists. In this lake you can also go fishing species such as the rainbow bass, practice water skiing with a board, and take a boat ride. The lake is surrounded by hills and pastures that you can roam to watch birds such as toucans, Howler monkeys and coatis. The area also has spectacular waterfalls and ancient caves that you can access by walking or riding a horse.

From Nuevo Arenal, you can admire the landscape of the mountains, watch the night show of the active Arenal Volcano and explore Arenal Volcano National Park whose main attraction is the volcano that presents lava flows and explosions with incandescent rocks and ashes. This park protects a forest that attracts birdwatchers to admire endangered species such as the bicoquilla booby, the pavón, the parasol bird, and the bell bird. The park is also home to multiple animals that include cougars, jaguars, white-faced monkeys, red monkeys, Congo monkeys, and reptiles. Interest sites in the park include the Volcanic Cone Viewpoint, located near the base of the crater; El Ceibo Trail that takes its name from a large ceibo tree; Heliconias Trail; and Coladas Trail, where lava mantles are found and still emit steam.

The town of Nuevo Arenal has restaurants, hotels, gift shops, banks, gas stations, an old bullring, and a lively nightlife that can be enjoyed in places like the Bamboo Bar and Restaurant, where you can find live music on certain nights. Some other attractions that you can visit in the surroundings include Arenal Eco Zoo, the Arenal Botanical Garden, and the hot springs at Tabacón Gran Spa Thermal Resort and The Springs Resort and Spa hotels.

***The official currency of Costa Rica is the Costa Rican colon (CRC).

Other destinations in Alajuela