Book an hotel at: Pittsburgh,United States 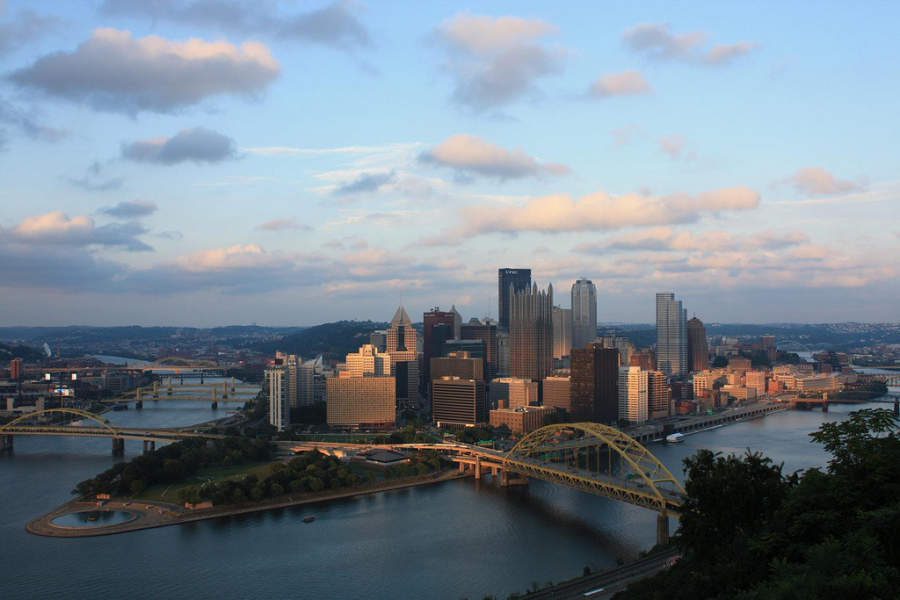 The Steel City, as Pittsburgh is known, is a modern destination with sports and cultural entertainment

It is a large sandwich consisting of meat, tomato, white cheese, and a large amount of fries.

It is a kind of crunchy pancake that can be eaten with jam or honey.

Oysters in their shell

A type of mollusk that is eaten directly from its shell.

The Steel City has a wide gastronomic offer that includes international restaurants and casual establishments, where the Pittsburgh sandwich is the most famous dish

Pittsburgh has restaurants for all tastes, where you can try international cuisine. One of the most recommended is Pointe Brugge Cafe, a Belgian establishment that serves salads, mussels, and waffles, which can be accompanied with jam or ice cream.

Other popular establishments are Capital Grille, serving dishes based on oysters, lobster, and crab; Fat Head's South Side Saloon, selling typical American dishes; and Sofra Istanbul, where you can try Turkish specialties.

If you want to try a typical dish of the city, go to Primanti Bros and order a Pittsburgh sandwich and a beer, as it is customary in the city.

The weather in Pittsburgh, United States

The weather of Pittsburgh is known as humid continental, having hot and humid summers, June to September, with temperatures ranging between 22 and 30 °C (71.6 and 86 ºF). If you are traveling in this season, you should pack clothes made of denim or cotton. Don't forget to bring a sweater to cover yourself at night.

In winter, December to February, temperatures are cool, recording -5 °C (23 ºF), though they can drop down to -15 ºC (5 ºF). This season may present moderate snowfall, so you should pack thermal clothing, jackets or sweaters, and snowshoes.

Pittsburgh is a rainy city, having rainfall throughout the year, being May the rainiest month. December and January are also rainy, but due to the cold weather, rainfall may become snowfall.

Pittsburgh is located in Pennsylvania, at the intersection of three major rivers: the Monongahela, the Allegheny, and the Ohio. Pittsburgh is known as the Steel City or the City of Bridges because it was a major producer of steel and because the city has over 400 bridges of various sizes. It currently has around 30 skyscrapers, prestigious hotels, restaurants, and a wide range of sports and culture.

Pittsburgh's cultural wealth is undeniable and can be seen in its museums, such as the Carnegie Museum of Natural History, exhibiting from dinosaur skeletons to artifacts of ancient civilizations as Egypt. Also, there is the Senator John History Center, associated with the Smithsonian museum, featuring various exhibitions, including wax figures of football players, vintage cars, and various curiosities. Other prominent cultural venues are the Carnegie Museum of Art and the Carnegie Science Center, with a planetarium. A visit to Pittsburgh is not complete without going to the Andy Warhol Museum, a venue dedicated to the work and life of this representative of pop art.

Some of the most popular attractions for locals and tourists are PNC Park, home of the Pittsburgh Pirates; the famous Heinz Field, home of the Pittsburgh Steelers; and Consol Energy Center, hosting hockey games and concerts by famous artists. Do not miss the Pittsburgh Zoo & PPG Aquarium, where you can see terrestrial and marine animal species. And for those who like to learn about the botanical world, the Phipps Conservatory has gardens with plants from different environments, as well as courses and workshops on environmental care.

Some must-see landmarks are Heinz Hall, a theater and music venue whose sole architecture and decoration is worth admiring; Pointe State Park, with a large fountain that lights up at night; and Mount Washington, a neighborhood featuring a viewpoint with stunning views of the urban landscape of the city, and Duquesne Incline, some old trams that offer tours along a steep slope.

Other destinations in Pensilvania