Book an hotel at: Poza Rica,Mexico 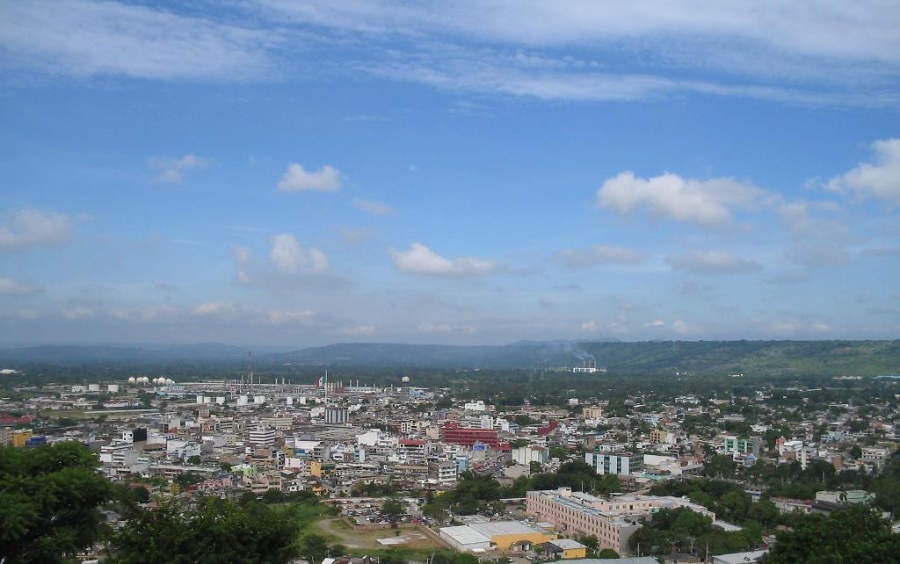 Poza Rica is an important trading and industrial hub, being the oil industry its main activity

A sort of tortillas prepared with corn dough, fried in oil, and stuffed with various stews, including beans, eggs, and cheese.

Dish prepared with crab and vegetables and then served as a soup.

The most traditional dishes of this city are made with fish in different preparations. Among the most typical dishes you can find the pescado en escabeche, consisting of fried fish with an infusion prepared with olive oil, vinegar with onion, pepper, bay leaves, and other vegetables; the delicious empanadas de camarón (shrimp patties); the famous huachinango a la veracruzana, red snapper fried and topped with tomato sauce, olives, and various spices; and the chilpachole, a soup of seafood and vegetables. Other typical dishes of the region are the traditional bocoles (called gorditas in other regions of Mexico), which are usually prepared with corn dough and filled with different stews and then fried in lard or oil; and the delicious zacahuil, a large tamal made with corn dough seasoned with dried chili, stuffed with mole, pork, chicken, or seafood, and baked wrapped in banana leaves in a pit.

As part of the tradition of this city, these dishes must be savored with the most representative regional drinks, such as the exquisite toritos, made with cane alcohol, fruit, and condensed milk; the traditional mosco, which is prepared with fermented fruit; and of course the delicious Veracruzan coffee, with a unique flavor and aroma.

You must visit La Cava restaurant during your visit to Poza Rica, since it offers an extensive menu with typical dishes of the region. You can also try Veracruzan specialties at the Barullo and 7 Brujas restaurants.

The weather in Poza Rica, Mexico

Poza Rica has a warm and humid climate throughout the year, with an annual average temperature of 24 °C (75 °F)

The months from April to July are the warmest in Poza Rica. Humidity is very high and makes temperature more sweltering and intense, exceeding even 40 °C (104 °F). We recommend bringing light and comfortable clothing, a cap or a hat, sunscreen, and sunglasses. Remember to drink plenty of water to avoid dehydration.

Nights tend to be cooler, especially during December and January, when temperatures drop to 15 °C (59 °F). If you travel during this season, it is important to pack a sweater or a jacket. Rains are very frequent in September and October, thus you should bring an umbrella.

The city of Poza Rica is located in the north of Veracruz, in the eastern area of Mexico. This community was named after the abundance of fish that inhabited the streams near this destination and it stands out, among other things, for being the administrative headquarters of the Northern Region of Pemex, the Mexican oil company. For this reason, it is common to find some structures related to the extraction of hydrocarbons, and monuments celebrating the importance of this activity in Poza Rica, including the Monument to Oil Workers and the Monument to the Little Machine.

In the downtown area you will find the Poza Rica City Hall, relevant because of the mural created by artist Pablo O'Higgins on its facade. This artwork, which was inaugurated on March 18, 1959, is the most important in northern Veracruz and represents the progression of the city from farming to the oil industry.

During your tour through this community, you will invariably reach the most important and busy esplanades of Poza Rica. The first one is the March 18 Civil Square, which has an auditorium where musical events are performed, housing a bust of the former President Lázaro Cardenas. The second one is Juárez Park, which also features a statue, although it corresponds to the former President Benito Juárez. Also, there is Las Américas Park viewpoint, also called Grandfather’s Hill, decorated with the flags of the nations of the Americas and where you will enjoy a fantastic view of the city.

Poza Rica stands out not only thanks to the oil industry, but also for its geographical location. This destination is an ideal stop for travelers wishing to visit nearby attractions, like Barra de Cazones, a fishing port with splendid beaches where you can go snorkeling, fishing, or just relaxing in its waters; the Archaeological Site of El Tajín, one of the most important Mesoamerican cities during pre-Hispanic times, with about 150 buildings discovered; and Papantla, declared a Magical Town of Mexico, where the ritual of the "bird-men" or the "flying men" was created; it is considered a World Heritage Site by UNESCO.