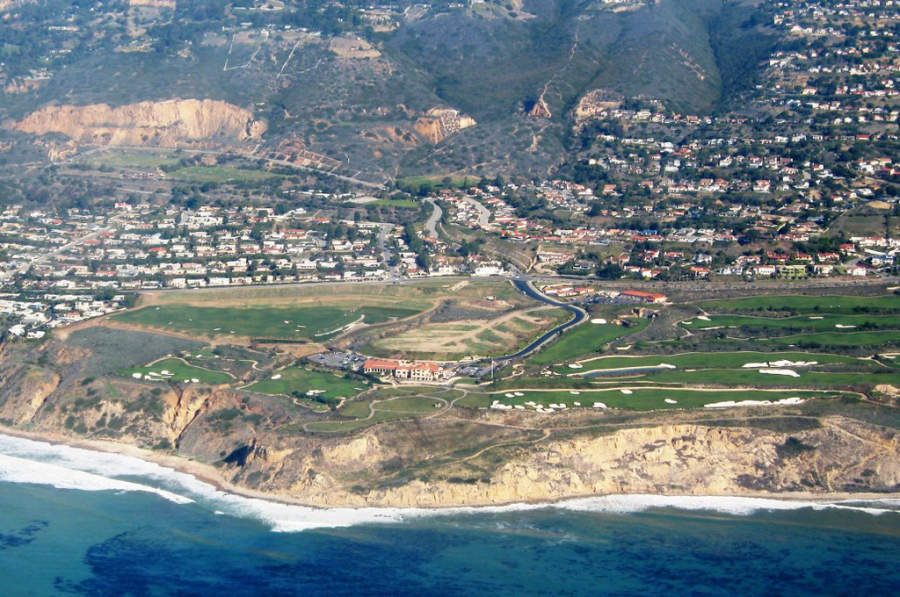 Rancho Palos Verdes is an ideal destination to enjoy the scenery of the ocean, the natural beauty of its hills, and to watch gray whales

Dining options in Rancho Palos Verdes are varied, from establishments in a shopping center to sophisticated restaurants within a golf course and a hotel

You find several dining options in Rancho Palos Verdes, such as the Admiral Risty Restaurant, which is in the Golden Cove shopping center, where there are other restaurants and fast food courts with Starbucks and Domino's branches. Also, there are some more sophisticated restaurants at the Terrenea Resort and Trump National Golf Club. The Terrenea Resort has eight restaurants, including Marsel's, serving Californian cuisine; Catalina Kitchen, which serves seafood buffets and Sunday brunches; Bashi, an option to try Asian dishes; and Cielo Point. The Trump National Golf Course houses two famous restaurants open to general public: The Café Pacific, that offers creative food, and The Golfer's Lounge.

Dry season (April to October): days are warm during the dry season in Rancho Palos Verdes. Maximum temperatures range between 21 and 26 °C (69 and 78 °F). Temperature drops between 8 and 10 degrees, having minimum temperatures of 15°C (59 °F). In addition, some light rains may fall. You should bring clothes made of natural fabrics as cotton or linen that will keep you cool, a hat or a cap, comfortable shoes, sunglasses, and a sweater for the cooler nights.

Rainy season (November to March): rainfall increases and then drops during these months in Rancho Palos Verdes. About 30 mm (1.1 inch) of rain fall in November, while February, the rainiest month of the year, accummulates 99 mm (3.8 inch); March accummulates an average of 56 mm (2.2 inch). The rainy season coincides with the coolest days of the year, with an average temperature of 14 °C (57 °F), an average maximum temperature of 19 °C (66 °F), and an average minimum temperature of 9 °C (48 °F). We recommend dressing in layers, with warm clothing at night, including a scarf, gloves, and a coat. Also, you will need a rain jacket or an umbrella and rain boots.

The city of Rancho Palos Verdes is located in a region that was inhabited by the Tongva people, in the suburban area of Los Angeles, on the coast of California. This town highlights for being on green hills and for the cliffs of the Palos Verdes Peninsula, enjoying fabulous views of the Pacific Ocean and Santa Catalina Island.

Rancho Palos Verdes features multiple parks and 10 natural reserves where you can go horseback riding, strolling, and cycling. The largest protected area is the Portuguese Bend Reserve, comprising hills, canyons, and hundreds of kilometers of trails. Parks in the city include Eastview Park, which has a children’s playground, picnic areas, and public toilets; Founder’s Park, where you can admire the ocean, have lunch, or celebrate a wedding in the gazebo; Frank A Vaderlip Sr Park, located on the banks of a cliff with benches to enjoy the landscape; Fred Hesse Jr Community Park, that has sports facilities and meeting rooms; and Marilyn Ryan Sunset Point Park, where there is the Officer Randall Simmons commemorative bridge. Additionally, there are many parks where you can walk with your dog; Rancho Caninos Dog Park is a good option since dogs can run freely there.

Visit Abalone Cove Shoreline Park, which has elevated areas to admire the landscape, a natural reserve with trails, and two beaches where you can swim: Abalone Cove and Sacred Cove, also called Smugglers Cove. Rancho Palos Verdes Beach and the Portuguese Bend Beach Club, part of a private community, are other beautiful beaches, although they are not suitable for swimming since they have rocks.

At Pointe Vicente Interpretative you can learn about the natural and cultural history of the Palos Verdes Peninsula. It is nestled in a park on the edge of a cliff; it is a traditional location for watching gray whales during their annual migration. This place is next to the Pointe Vicente Lighthouse built in 1926, where people say that a woman’s ghost appears at night when there is fog. To see exhibitions you can visit the Ladera Linda Community Center, which houses the Discovery Room, featuring a collection of local flora and fauna, sports courts, a children’s playground, and a meeting room; Palos Art Center, which organizes displays throughout the year; and the Salvation Army Heritage. In addition, the famous Wayfarers Chapel, called the Crystal Church, featuring a design that blends in with vegetation, is a venue for concerts, readings, artistic presentations, and weddings.

Rancho Palos Verdes has two golf courses overlooking the sea: Los Verdes Golf Course and Country Club, with 18 holes, where you can hold events, and the Trump National Golf Course, owned by Donald Trump, set on the top of a cliff and recognized among the best places to play golf in California. For shopping, you can go to Golden Cove, overlooking Catalina Island.

The city of Rancho Palos Verdes organizes activities for the community, such as the Egg Hunt Eggstravaganza, readings for children, and summer activities for teenagers. Also, there are annual traditional celebrations such as July 4 and Whale Day, offering children's activities, crafts and food stalls, exhibitions, raffles, and tours of the Pointe Vicente Lighthouse.