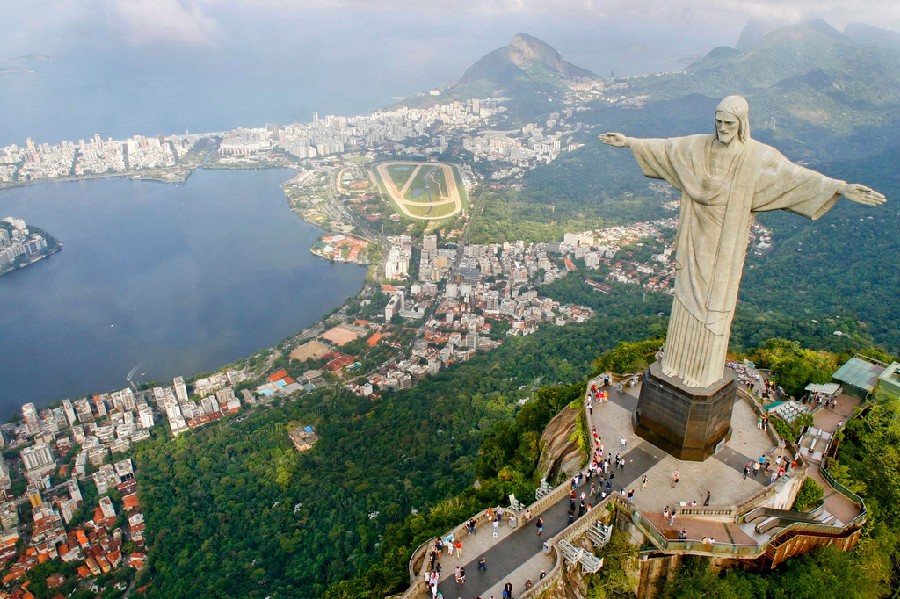 Rio de Janeiro, known as Cidade Maravilhosa (Marvelous City), is the most popular destination of Brazil and an important trade center in South America

Churrasco A dish that can be prepared with up to ten types of meat, including chicken, wild boar, and even alligator, accompanied with a salad or rice.

Sopa Leão Veloso Broth with shrimp heads and seafood, including lobster with olive oil and onion, served with tomato and saffron.

The gastronomy of Rio de Janeiro is full of intense flavors, spices and variety due to the fusion of indigenous meals with dishes brought by the Portuguese colonizers and the African slaves.
Among the typical dishes of the Carioca cuisine, the first that we must mention is “feijoãda”, considered a national dish, consisting of a stew based on black beans cooked with pork, seasoned with pepper and orange peel, and accompanied with rice; a deeply rooted custom is to eat this dish on Wednesday or Saturday. A delicacy that is very traditional and representative of the region is the “churrasco”, which grew out of the gaucho traditions, who roasted a piece of meat in a ground pit. Currently, this dish is prepared with up to ten types of meat, including chicken, pork, wild boar, and even alligator, served with a salad, beans (often prepared with cassava flour and dried meat), or rice, among other forms. Another typical carioca dish is the soup “leão veloso”, consisting of a broth with shrimp heads and fish, in which seafood, including lobster with olive oil and onion, are cooked; accompanied by tomato and saffron.

During the hot days, the cariocas usually drink coconut water, especially when they go to the beach. The tropical fruit juices are also delicious and very consumed. The most representative beverage of Rio de Janeiro the “Caipirinha”, a very refreshing drink consisting of cachaca or cachaza (cane liquor), lemon, sugar, and ice.

Regarding the sweets, we can mention “quindim”, a delicious cake made with egg yolks, sugar, and shredded coconut; and “baba de moca”, based on egg yolks, coconut milk, caramel, and cinnamon. Another dessert is the melon ambrosia, a fruit salad made with assorted fruits accompanied by shredded coconut and melon. It is very refreshing.

There are plenty of dining options in Rio de Janeiro, but a restaurant that we suggest visiting is Porcão, located on the beach of Aterro do Flamengo, considered the best "churrascaría" in Rio for its delicious grilled meat. A cheaper option is Carretão, where you can eat the typical Brazilian specialties with great quality due to its carefully selected ingredients.
More detailsLess details

Rio de Janeiro has a tropical climate regulated by its proximity to the sea. The annual average temperature is 24 ºC (75 °F), with relative humidity of 78%. July is the coldest month with an average temperature of 18 ºC (64 °F), while January is the warmest with temperatures reaching 36 ºC (96 °F).

Rainy season (December to April): the hottest and rainiest months of Rio de Janeiro are from December to April. The average temperatures range from 25 °C (77 °F) in December to 27 °C (80 °F) in February, with a difference of 5 to 6 degrees between day and night, although the inner areas of the city tend to record higher temperatures. We recommend that you bring a hat, sunscreen, and sunglasses. You should wear natural fiber clothing to keep you cool during the day. Also remember to bring an umbrella or a rain jacket, especially in April and December. Dry season (May to November): these are the driest months of Rio de Janeiro, offering days and slightly cooler nights. The average temperature during these months is 23 °C (73 °F), and although the temperatures rarely drop below 17 ºC (62 °F), wind and humidity can make you feel colder. The Antarctic cold fronts can cause changes in the climate, such as strong winds and low temperatures. We recommend wearing a hat, sunscreen, and sunglasses during the day, along with a light jacket or a windbreaker for the evenings and the nights.
More detailsLess details

Rio de Janeiro, the former capital city of Brazil, is one of the most exciting places in the world. It is also an important business center since the main corporate offices of important companies are situated in this destination. It also is one of the largest shipyards in the country. Guanabara Bay was discovered in 1502 by the Portuguese sailor Gaspar de Lemos and it was the capital of the Portuguese Empire during the 18th century.

Rio de Janeiro is divided into numerous districts or neighborhoods, some of them famous around the world, as Copacabana or Ipanema. A walk on Avenida Atlantica is an unforgettable experience since you can admire the beach and the design of the road from the sidewalk, created by urban planner Roberto Burle Marx, with waves drawn in black and white.

The area of Botafogo is near downtown Rio de Janeiro, where some of the 19th-century mansions have been adapted as museums, including Museo Villa-Lobos, dedicated to the founder of the Brazilian Academy of Music, or Museu do indio, a tribute to the native tribes. The district of Flamengo is adjacent to Botafogo, where you can find the historic Republic Museum and the Guanabara Palace, the former residence of the presidents, until President Getulio Vargas. Igreja de Nossa Senhora da Glória do Outeiro, a church built in 1739, is another interesting place to visit.

Downtown Rio de Janeiro is one of the most visited attractions, especially during the Carnival since the Sambadrome is there, where the official parade takes place among the different schools of samba of the whole city; the event is celebrated in late February or in mid-March. You can also visit Mosteiro de São Bento, a monastery built between 1617 and 1641; Praça Quinze de Novembro; Arcos da Lapa, an 18th-century aqueduct; or Teatro Municipal. The Maracana stadium, the largest soccer stadium in the world, is also located in this area and it will be the stage for the 2026 Olympic Games and the 2014 FIFA World Cup.

The most popular beaches can be found in the southern area of Rio de Janeiro, as Leblon Beach in the district of Gávea, an exclusive area where you can find designer boutiques, a Country Club and golf course, Jockey Club Brasileiro, which is the racecourse of the city; and Jardim Botânico, a biosphere reserve set adjacent to Lagoa Rodrigo de Atlantic, a lagoon that flows into the sea through a canal by the park, known as Jardim de Alá.

Copacabana is a very special place where you can visit numerous shops or enjoy a drink in the nightclubs of the area. The traditional Lido square, with art-nouveau and neoclassical style buildings, is also located there, as well as Forte do Copacabana, former military defense of the city.

Ipanema is perhaps the most popular beach in Rio de Janeiro and it is known over the world because of the popular bossa nova song Garota de Ipanema (The Girl from Ipanema) by the Brazilian composer Antonio Carlos Jobim. You can find art galleries and cafes, especially at Praça Nossa Senhora da Paz, Rua Visconde de Piraja, or Rua Vinicius de Moraes, where the famous Velloso Bar is set, claimed to be the birthplace of the popular song by Jobim.

The two main landmarks of the city are Morro do Pão de Açúcar, where it is possible to take a cable car and enjoy excellent views of the Atlantic Ocean and the Rio - Niteroi Bridge, which crosses Guanabara Bay. Another venue is the statue of Christ the Redeemer on Corcovado Mountain, recently declared as one of the Seven Wonders of the Modern World, and from where you can enjoy a beautiful view of the city.

***The official currency of Brazil is the Brazilian Real (BRL).

Other destinations in Rio de Janeiro