Book an hotel at: Santiago Tuxtla,Mexico 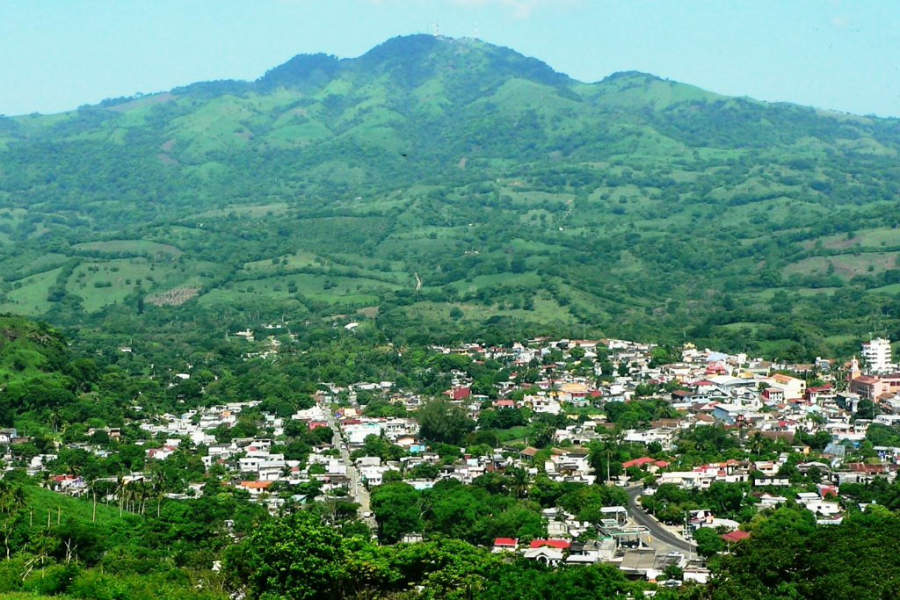 Santiago Tuxtla is the cultural capital of Los Tuxtlas, and a proper site for discovering the Olmec civilization

Plant with heart-shaped leaves that is cooked with beans.

Regional dish based on iguana meat prepared with vinegar and spices such as bay leaf.

Traditional bread made with corn flour and wheat flour.

Discover the creativity of the regional cuisine in Santiago Tuxtla

The diversity of dishes in Santiago Tuxtla finds its origins in the simplicity of the indigenous cuisine, that preferred steam cooking and boiling, enriched by local ingredients. Try chochos en tomachile, an ear of a palm tree prepared with tomato and chili; chonegui, a local plant which is usually served with beans; and crema de chinini, a soup made with a fruit of the family of avocado.

Other stews are common, including pescado empapelado, mojarra frita, tapite con tomachile, which is fish wrapped in banana leaves with a mixture of tomato and pepper; and huesos de cerdo asados con chilpachole, which is roasted pork bones seasoned with acuyo. Another slightly more exotic regional dish is iguana meat, usually prepared pickled.

Try pan de marquesote, consisting of bread made with a mixture of wheat and corn flour; tecoyotes, which are corn cookies made with beef butter and cinnamon; or totopostes, a pre-Columbian dish made of corn, water, and butter. To cool off you will find chochogo, a beverage made of a species of wild grape with a sour taste. Dining options are limited in Santiago Tuxtla, but the market has a variety of places where you can try regional specialties.

The weather in Santiago Tuxtla, Mexico

The climate in Santiago Tuxtla is hot and humid, with an average temperature of 25 °C (77 ºF). The heaviest rains occur during summer and fall, recording an annual average of 2,274 mm (89 inch) of precipitation and 146 rainy days

Rainy season (June to October): there are heavy precipitations during these months in Santiago Tuxtla, with an average rainfall that surpasses 200 mm (8 in). September is when there is heavier rainfall, with precipitation averaging 497 mm (20 in), and July is the month with more rainy days, having 21. During the rainy season, days are from warm to temperate with an average temperature of 26 °C (79 °F), recording highs of 32 °C (90 °F) in June and lows of 20 °C (68 °F) in October. We recommend packing a rain jacket and umbrella, rain boots, t-shirts, or sleeveless shirts, a hat or a cap, and sunglasses.

Dry season (November to May): although rainfall is rare, precipitations are intense in November and December, moderate in January and May, and light from February to April. This season in Santiago Tuxtla has the lowest and highest temperatures, with an average of 24 °C (75 °C). May is the hottest month of the year with 34 °C (93 °F), while in January temperature drops down to 16 °C (60 °F). You should bring sunscreen, a hat or a cap, sunglasses, t-shirts or sleeveless shirts, a sweater for the nights and even a jacket for the cooler months.

The city of Santiago Tuxtla is the head of the municipality with the same name and where Los Tuxtlas Biosphere Reserve is located, which is a jungle area ideal for adventure tourism. Santiago Tuxtla is in the south of the Mexican state of Veracruz, on the slopes of Sierra de los Tuxtlas and its landscape is dominated by El Vigía volcano.

This picturesque city with remains of the Olmec civilization features a charming drowsy atmosphere, with narrow crooked streets that go over the Tepango River and several historic buildings. The main park of Santiago Tuxtla has a large Olmec head found in Cobata, which is the only one discovered with its eyes closed; it is believed to represent a dead person. In the surroundings of this square you can find the City Hall, an old church, and the main market.

In front of the municipal park sits the Tuxtla Regional Museum, where pieces of the Totonac and Olmec cultures are exhibited, including obsidian objects, mascaron ornaments, utensils, adornments, and sculptures, among others. The collection of this museum comprises the biggest and the smallest Olmec heads ever found, and the Huayapan Head, a 20-ton monolith to which magnetic powers are attributed.

Santiago Tuxtla is considered the cultural capital of Los Tuxtlas and is home of different festivals throughout the whole year. Its main festivity is on July 25 and it is dedicated to Saint James. During this celebration, every day at 5:00 in the morning, a band plays La Diana song on the streets. Additionally, in this annual party there is the Mojiganga, an event with enormous dolls and bulls made of woven reeds of palm leaves that chase people; fandango dances to the rythm of son jarocho, and traditional dances such as Daza de los Negros contra Cristianos. In Christmas, there are two popular traditions: Acarreo de Niños, where figures representing baby Jesus are carried around the streets to the sound of regional music, and La Rama, which consists of taking from home to home a branch of a tree adorned with Christmas ornaments to organize a party every night. Other famous celebrations in Santiago Tuxtla are the Holy Week, where streets are lighted with candles on the Friday of Grief and the Good Friday Silent Procession. In March you can witness white magic ceremonies where several healers, shamans, and temascal leaders offer their alternative services. In June, there is the tradition of Líceres, where the inhabitants disguise as the lynxes that cornered the people in the church when the San Martin Volcano erupted.

The Tres Zapotes archaeological site and museum is located on the outskirts of Santiago Tuxtla, next to the first sugar mill in Mexico, which is said it was built under the orders of Hernán Cortés. Also, the town of Catemaco is less than 30 kilometers (18.6 mi) away, famous for its lagoon and its ancestral witchcraft tradition. Additionally, there are natural landscapes that invite to practice hiking, and waterfalls ideal for swimming or contemplating their beauty.