Book an hotel at: Tampa,United States 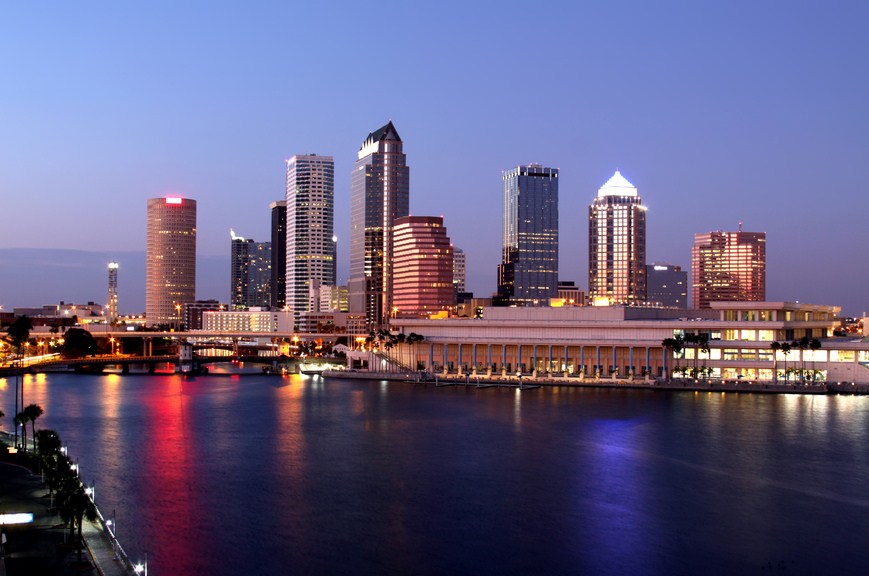 One of the main tourist destinations in Florida, known as Cigar City because of the influence that the cigar industry had in the development of the city in the early 20th century

Grouper sandwich Traditional sandwich of grouper with lettuce and vegetables.

Beer Refreshing beer which you can enjoy in any bar.

The gastronomic scene of this beautiful destination is one of the most diverse in the southern state of Florida.
As in most cities of "the sunshine state", there is a great cultural diversity, which is why you can enjoy typical dishes from many parts of the world. In this region, you can visit from casual beachfront restaurants to the most luxury establishments serving different specialties, including delicious seafood. Some dishes that you cannot miss on your next visit to Tampa include the exquisite Spanish "paella"; the grilled grouper sandwich served with lettuce, tomato, and tartar sauce; and the delicious Cuban sandwiches made of pork, ham, and salami, served with Swiss cheese, pickles, and mustard. When you meet the cuisine of Tampa, you learn about the customs and traditions of its people, and a great way to do so, is by starting the day with a delicious Cuban bread and coffee with milk. During the day, you can enjoy any delicious dish in the many restaurants that the city has for you to enjoy. Among the most typical dishes of this area, you can find the Spanish bean soup or the delicious crab enchilada, exquisite blue crab enchilada with a sauce served with noodles.

Your visit will not be complete if you do not make a stop at one of the picturesque coffee shops to enjoy a delicious cup of Cuban coffee and an exquisite dessert, while you enjoy the beautiful typical scenery under the moonlight. To cool off, you can enjoy a beer, which, although not originally from Tampa, you will enjoy it in the local style.

At the Mise en Place restaurant you can try acclaimed local flavors; this restaurant offers sophisticated service, an outstanding wine list, and staff willing to serve you as you deserve. If you prefer something more traditional, Pipo's offers the famous Cuban sandwiches. Of course, you can also enjoy major chain restaurants, from exquisite and fine meat cuts to the popular Buffalo style chicken wings.
More detailsLess details

The weather in Tampa, United States

Tampa has a subtropical climate with hot and humid summers, famous for their nocturnal thunderstorms, and dry winters. The annual average rainfall is 1,116 mm (43 in), most of which falls between June and September. The annual average temperature is 22 °C (71 °F), with average highs of 28 °C (82 °F) and average lows of 17 °C (62 °F).

Spring (April to May): springtime in Tampa City has cool to mild temperatures and some rainfall, especially during the night. The arrival of late cold fronts may lower the temperature a bit for a couple of days and cause thunderstorms. Average high temperatures reach 29 ºC (84 ºF) during the day, while nights have an average temperature of 18 ºC (64 ºF), which may be lower at the beginning of the season. We recommend bringing light and comfortable clothing, your swimsuit, sunscreen, and sunglasses to wear during the day, as well as jeans and a sweater or a light jacket for the evenings. Summer (June to September): summers in Tampa are hot and very humid, with thunderstorms that are usual in the afternoon and the evening. The average rainfall of this season is 163 mm (6.4 in) per month. The average high temperature is 32 ºC (90 ºF), while there are average lows of 23 ºC (73 ºF) at night. July and August are the hottest and rainiest months, with an average temperature of 27 ºC (81 ºF) and about 180 mm (7 in) of rain. Summers are also part of the hurricane season in Tampa. We recommend bringing your swimsuit, sunscreen, a hat, and light clothing. You should always use sunscreen and carry an umbrella or a rain jacket with you, especially in the evenings. Fall (October to November): these months in Tampa bring cooler temperatures and less rain. The average monthly precipitation is only 48 mm (2 in) and average temperatures have highs of 27 ºC (81 ºF) and lows of 16 ºC (61 ºF), both of which drop as weeks go by. The milder and drier climate of Tampa’s falls is ideal, but hurricanes can still occur at this time. You should pack your swimsuit, sunglasses, sunscreen, and light clothing to wear during the day, as well as jeans and a light sweater for the cooler nights. Winter (December to March): the winter months in Tampa City bring mild to cold temperatures and a few days of precipitation. Average temperatures range from lows of 10 to 14 ºC (50 to 57 ºF) and highs of 21 to 25 ºC (70 to 77 ºF), although cold fronts may lower the temperatures several degrees for a few days. Freezes may occur, though they do not happen every season. If traveling to Tampa in winter, we recommend bringing a swimsuit, sunglasses, sunscreen, comfortable clothing, and a light sweater to wear during the day, as well as jeans, closed-toe shoes, and a sweater or a jacket for the colder evenings.
More detailsLess details

The area of Tampa Bay, west of Central Florida, includes the cities of Tampa, St Petersburg, and Clearwater. Although this area was explored by Spaniards in the early 16th century, there were no permanent settlements until 1824, when the United States Government established the military zone of Fort Brooke. Tampa remained a fishing village until the discovery of phosphate mines. The nickname of Cigar City came when Vicente Martínez Ybor moved the cigar operations from Cayo Hueso to this city. Spanish and Cuban immigrants have contributed to the development of the city.

Tampa is home to the largest port in Florida, with three cruise terminals and a future fourth, being the starting point of major shipping lines. Port of Tampa is especially important in container trade and it receives many tankers, so it is classified as number 16 in United States by tonnage marketed.

The area of Tampa Bay is home to three sports teams in the major leagues of the United States, as the Tampa Bay Rays, a baseball team that plays at Tropicana Field in Petersburg; Tampa Bay Lighting, an ice hockey team; and the Tampa Bay Buccaneers, who play football at the Raymond James Stadium, where the Super Bowl has been held twice in the last decade. The city receives several baseball training games in spring, including the New York Yankees, the Phillies of Philadelphia, and the Toronto Blue Jays.

The city features numerous attractions, as the Tampa Museum of Art and the Salvador Dalí Museum, which houses the largest collection of works by the Spanish surrealist painter outside Europe. Tampa Bay Area offers places as Lowry Park Zoo, Florida Aquarium, and Petersburg Marine Aquarium.

Theme parks have great relevance in the city, highlighting Adventure Island, across from the famous Busch Gardens®, an African themed park that includes a safari experience, and several roller coasters, some of them among the best in the US. Winter Have, where Legoland® Florida is located, is approximately 90 kilometers (54 mi) from downtown Tampa.