Book an hotel at: Tecolutla,Mexico 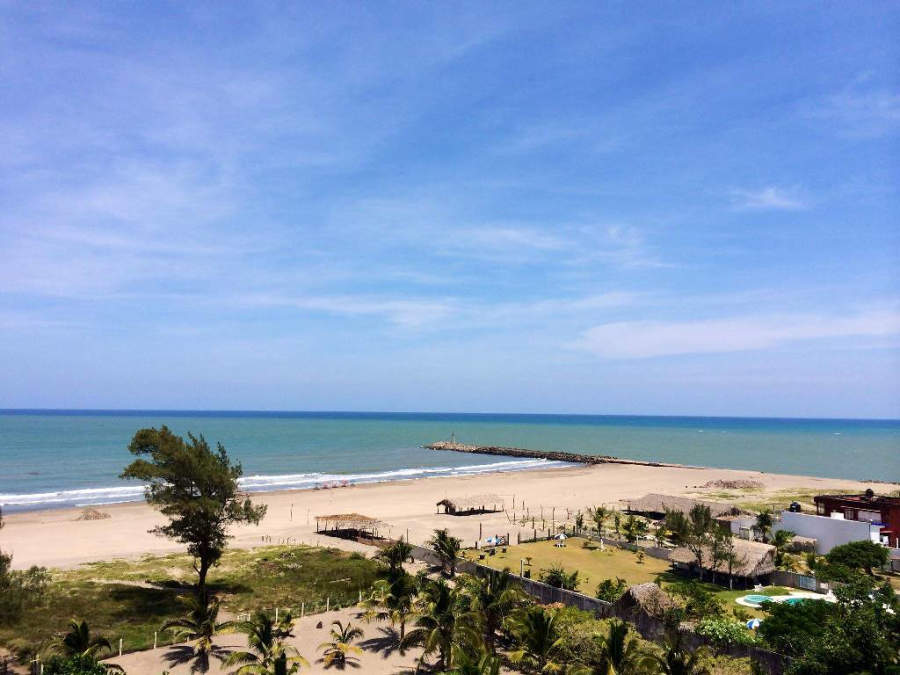 Wide beaches with turquoise water, the lush green jungle, and mangroves full of life, are just a sample of what Tecolutla has to offer

Sweet made of grated coconut or and milk.

Beverage made with schnapps, crushed ice, and fruit of your preference, similar to a smoothie.

Diversity and creativity are the essential characteristics of Tecolutla's cuisine, having its own recipes and culinary traditions, which became emblematic in the area. Guatape de camarón is the most popular dish, consisting of a spicy shrimp soup with aromatic herbs and ground corn. Other highlights include Coco malayo, a whole coconut stuffed with seafood, baked and grated; piñas rellenas de mariscos, baked whole pineapple stuffed with seafood; camarones a la diabla, shrimp in a hot sauce; and pescado Tiquinchin, fish cooked over firewood.

The most popular sweet in the region is cocada, elaborated in Tecolutla by combining shredded coconut with a variety of fruits as tamarind, strawberry, guava, peach, guava, lemon, pineapple, and passion fruit, as well as other ingredients including milk with raisins, coffee liquor, brown sugar, tequila, vanilla, eggnog, and cocoa.

Regarding beverages, local people tend to drink torito, a mixture of brandy combined with guava or coconut pulp, although the one with peanut is typical.

All these delicacies you can taste in most of the restaurants that line the beaches of the Esmerald Coast. You can visit Loncheria Tecolutla and El Camaron Desvelado, or El Caracol restaurant, which is facing the river.

The weather in Tecolutla, Mexico

Tecolutla enjoys a warm and humid climate most of the year, with an annual average temperature of 23 °C (73 °F)

Tecolutla has a warm humid climate with rains during summer. The rainiest months are July, August, and September, while February, March, and April are the driest. The warmest and most humid season if from June to October, increasing the thermal sensation. We suggest packing clothes made of natural fabrics such as cotton or linen, along with your swimsuit, flip-flops, sunscreen, insect repellent, and a cap or a hat. Remember to bring your folding umbrella or a rain jacket.

The temperature drops a bit between November and May due to the north winds in the Gulf of Mexico, with lows of 19 °C (66 °F). Its beaches often have strong waves because of the wind intensity. We recommend packing a sweater or a jacket for the cool nights, as well as long-sleeved shirts and pants.

Tecolutla is a municipality of Veracruz, in the region of Totonacapan, in the north of Veracruz. The area was home of a pre-Hispanic Totonaca population called "Tecolotlán" which means "place of owls".

This destination borders to the north with Papantla, to the east with the Gulf of Mexico, to the south with Martinez de la Torre, and to the west with Gutiérrez Zamora. The city hall is 105 kilometers (63 mi) from the capital of Veracruz.

Tecolutla is considered the third most important destination of Veracruz due to its beautiful beaches, nationally and internationally recognized for their clean and safe crystalline turquoise waters, as well as for their numerous hotels, restaurants, bars, and recreational facilities. The municipality is divided into two tourist areas, Costa Esmeralda and Villa y Puerto de Tecolutla. The first one is the coastal strip, where there are comfortable and modern hotels; and the second one comprises the town, the river, and its green marshes.

A tour of the coastal boardwalk allows admiring different landscapes. From upstream to the mouth of the river you will find the resting area of birds, called by villagers as the Bird Sanctuary. Other attractions are the entrances to the estuaries of the river, called Estero de Larios, and La Silvena; both can be explored by boat.

You can visit the Parish of Our Lady of Guadalupe, Faro Viejo, the City Hall, and the Central Park, in downtown Tecolutla, where the bust of Miguel Hidalgo is set. You can also buy local handicrafts made of shells, snails, urchins, coconuts, wood, and coconut palm leaves.

A must visit are the mangroves, particularly those situated in Cienega del Fuerte State Park, a protected area spanning over 800 hectares (1,976 acres) of mangroves with old trees, over 300 years old, and a large area of floodplain forest, which makes it one of the few preserved areas in the Mexican state of Veracruz with interpretive trails and areas for boat rides, where you can observe local flora and fauna.

Another important attraction is the Tecolutla Aquarium, where you can see ornamental and reef fish, raccoons, parrots, rabbits, badgers, hawks, turtles, and lizards, among others; the Vida Milenaria turtle camp, home to three protected species of turtles: ridley, green, and hawksbill; and the Community Marine Museum, which exhibits a collection of giant species of marine life.