Book an hotel at: Tlacotalpan,Mexico 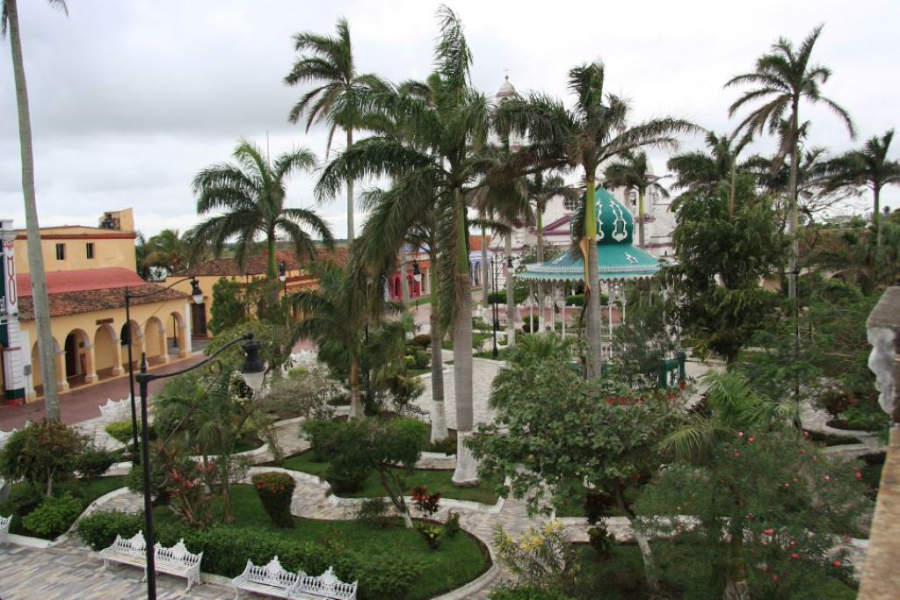 Tlacotalpan, declared a World Heritage Site by UNESCO, is a city in Veracruz, popular for being the birthplace of great artists such as Agustín Lara and for its jarana music

Made with corn dough, stuffed with various stews, and fried.

Dish similar to the seafood paella, made with shrimps, octopus, crabs, and clams.

Sweet beverage made with milk and rum. The traditional flavor is peanut, but it can also be prepared with different fruits.

They are served with cheese and topped with cream.

The gastronomy of Tlacotalpan offers seafood, including snook, mojarra, crab, and prawns as crayfish and crawfish, among other delicacies. One of the typical dishes is tumba-style rice, a kind of paella made with shrimp, octopus, crab, and clams. Patties stuffed with snail, shrimp, cheese, or meat are also very popular.

Tlacotalpan offers tismiches for exotic and adventurous palates, which are larvae of fish dried and prepared with the recipe of veracruzana style with onion, garlic, tomato, coriander, olives, or capers; or in tacos, on fried tortillas, or in patties and tamales. People say that the tismiches are a culinary delicacy similar to caviar or escamoles.

The tamales are made with pumpkin seeds and beans, izote flower with pork, pork crackling, or brown sugar. There are also cabeza de perro tamales of different sweet flavors.

Among typical beverages you can find the cold popo, made with cocoa, rice, cinnamon, and anise, and an herb called chupipi; coconut water; and traditional peanut toritos.

If you want to sweet your palate, taste the borracha soup, a moist and creamy cake from the Caribbean, which is prepared with soletas (kind of cookie), almond sweet, sugar, cinnamon, sherry, and orange blossom water. You can also savor the fried plantains served with cheese and topped with cream.

The weather in Tlacotalpan, Mexico

Tlacotalpan has a warm climate, with heavy rains in summer and early fall. The annual average temperature is 25 °C (77 °F)

Rains in Tlacotalpan are heavy in April and May, and torrential between June and September, but decrease in intensity after these months. Even with rain, days are warm and nights are mild. We recommend packing clothing made of natural fibers, a cap or a hat, sunglasses, sunscreen, and insect repellent. Don't forget an umbrella or a rain jacket.

From December to March, the climate in Tlacotalpan is hot during the day and cool at night, with occasional showers. The lowest temperatures are recorded in January, reaching an average of 23 °C (73 °F). We recommend bringing T-shirts, a cap or a hat for the day, and a light sweater for the evenings.

Tlacotalpan is located on the banks of the Papaloapan River, near its mouth at the Gulf of Mexico and 200 kilometers (120 mi) from Xalapa. It is one of the most typical and colorful destinations in Veracruz. Its name comes from the Nahuatl language and means "In the middle of the earth."

Declared as a World Heritage Site by UNESCO, Tlacotalpan has a culture product of the indigenous, Spanish, and African-Caribbean mix, a fact that is reflected in its architecture, cuisine, traditions, and customs. Its wide streets parallel to the river are ideal to take a walk and admire the typical houses of sloping roofs covered with tiles.

The historic center of Tlacotalpan hosts religious attractions such as the Neoclassic-style Parish of San Cristóbal, one of the best preserved temples in the city, built in the early 19th century; the Sanctuary of the Virgin of Candelaria, a Mozarabic and Neoclassical-style building that has more than two centuries, whose construction includes coral from the Gulf of Mexico. In this area, you will also see the Church of San Miguelito, which houses an oil painting image of Our Lady of Solitude, venerated as the Solita de San Miguel.

The Zaragoza Park is a meeting point for local people and tourists. It has a Moorish gazebo dating from the 19th century amidst the palm trees that give the characteristic atmosphere of a typical coastal province, and surrounded by restaurants, shops, and houses with spectacular arches. The boardwalk was built in 1857 and offers a beautiful view of Tlacotalpan next to the Papaloapan River. Here, you can rent motorboats to sail aong the river and see the city and its architecture from a different way, as well as the regional flora and fauna.

Tlacotalpan has museums, such as the Salvador Ferrando Colonial Museum at the former house of the local painter, exhibiting an important collection of his work, which captures the local people and typical landscapes, and displaying some colonial items and antiques. In addition, you can visit the Agustín Lara Museum, which has a permanent exhibition of trophies, newspaper clippings, and photographs of the poet musician.

We recommend visiting the Nezahualcóyotl Theater, known as the Colossus of Sotavento, an architectural piece of unparalleled beauty; Agustín Lara Culture House, which contributes to the preservation and promotion of the cultural events of Cuenca del Papaloapan; and the Tlacotalpan City Hall, which is facing the main square and set within a building from 1849.