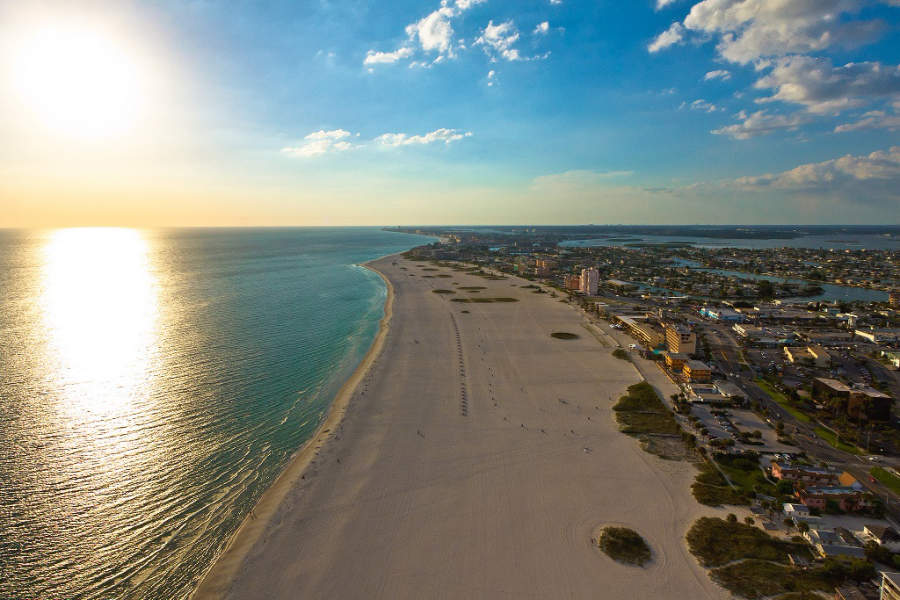 Hot drink of bitter taste which is prepared from roasted ground coffee beans diluted in water.

Pork meat, ham, and salami, among other meats, which are served between two loaves of bread, with cheese, pickles, and mustard.

In this city you can enjoy from casual restaurants on the beach, to luxurious restaurants serving different specialities, including exquisite dishes based on seafood. The most outstanding influence in the cuisine of Treasure Island comes from Cuba, with dishes like the Cuban Sandwich of pork, ham, and salami, served between two loaves of bread, served with Swiss cheese, pickles, and mustard.

During your tour of Treasure Island you will find various commercial premises with a pleasant and relaxed atmosphere. If you decide to rest a moment at one of these sites, you can enjoy the typical Cuban coffee, a hot drink of bitter taste which is made from roasted ground coffee beans.

The climate of Treasure Island is subtropical, with an average temperature of 22 ºC (71.6 ºF)

Summers in Treasure Island are hot and humid, with maximum temperatures of 30 °C (86 ºF). On the other hand, winters are cold and fairly dry, with temperatures that go down to 10 °C (50 ºF). Springs (April and may) and falls (October and November) are the ideal seasons to visit this destination, as there is a balance between hot days and cool nights. If you plan to travel in summer, it is best to use clothing that is comfortable and light, while in winter you will need a sweater or a jacket.

Rains fall mostly during summer and there are occasional thunderstorms. The hurricane season is from June to November; we recommend you to keep track of the weather conditions during these months since some hurricanes may hit this community.

Treasure Island is located on the west coast of Florida, next to St. Petersburg, very close to Tampa. Its name comes from the stories told by some landowners about the fact that they had found wooden chests within their lands, that supposedly contained treasures.

One of the main attractions of Treasure Island is its beaches, and the most visited area is the central region of the island, known as mid-island. This region has 6 kilometres (3.7 mi) of beaches and it has a 1-kilometer (0.6 mi) trail, known as the Treasure Island Beach Trail, ideal for walking, strolling with your dog, and riding your bike or skateboard. The north and south part of the island has beautiful beaches, however, they are less visited because they are more narrow. Also, in the southern area of the island you will find a boardwalk from which you can contemplate the vast sea, or relax and fish.

If you like sports, you cannot miss Treasure Bay, a sports complex that features a 9-hole golf course and several tennis courts. There you will find a beach volleyball court, a basketball court, and a children’s playground.

Your visit to Treasure Island will not be complete without a tour of the park at the Treasure Island Community Center, where you'll find an impressive Veteran’s Memorial. This site is widely used for various events throughout the year because of its location next to the community center of the city, a popular venue for concerts and musical performances.