Book an hotel at: Valladolid,Mexico 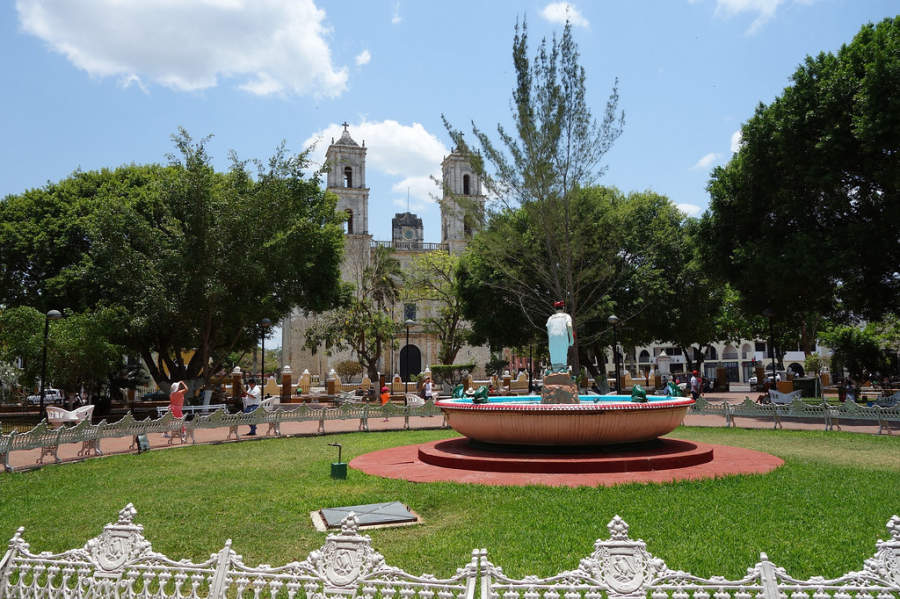 Valladolid is a Magical Town in the Mexican state of Yucatan. Also known as the Capital of the Mayan Orient, the city is famous for its colonial atmosphere and rich history.

Specialty of pork bathed in a delicious sauce of tomato and serrano chilis.

Spirit drink produced from the bark of a tree with the same name.

The gastronomy of Valladolid is quite varied, but in general is based on the use of corn, meats, and sometimes seafood. Among the most typical dishes are the lomitos, made of pork with tomato sauce and serrano chilies; the escabeche oriental, prepared with pieces of chicken or turkey cooked in a broth flavored with spices and onions; and the longaniza de Valladolid, spicy pork sausage flavored with ancho chili, garlic, vinegar, pepper, and cumin, among other spices, and served roasted with sour orange and habanero chili sauce.

Other popular dishes are Kibis, which are a kind of croquette made with ground wheat and beef; chile relleno, poblano chili pepper stuffed with cheese; pibis, a kind of tamale stuffed with chicken or pork, wrapped in banana leaves, and cooked in an underground furnace; and sopa de lima or lime soup, among many others.

Its typical drinks include the delicious Xtabentún, a digestive sweet liqueur with a delicate flavor that is made using a flower of the same name that grows in the Yucatán Península. Chokó sakam is another regional beverage prepared with boiled corn; and balché, a spirit drink produced from the bark of a tree of the same name, which was formerly used in Mayan ceremonies.

Valladolid is one of the best destinations to enjoy the typical food of the region, and you will find a variety of restaurants like Yerbabuena del Sisal, Jardín de los Frailes and Hacienda Selva Maya, which offer an extensive menu of typical specialties from Yucatán.

The weather in Valladolid, Mexico

Valladolid has a tropical climate with rainy summers, high humidity, and a little variation of temperature throughout the year

The rainy season in Valladolid lasts from May to October. Thunderstorms are common, especially in the evenings, and the maximum temperature oscillates between 33 and 36 °C (91 and 97 °F), but the high humidity increases the wind chill. Evenings tend to be cool, with lows of 21 °C (70 °F). We recommend bringing comfortable clothes and shoes, clothing made of natural fabrics, sunscreen, biodegradable insect repellent, a cap or hat, and sunglasses. Remember to pack a folding umbrella or a rain jacket.

The driest months in Valladolid are from November to April, but there are rains from time to time. The maximum temperature during these months is 35 °C (95 °F) during the day, with lows of 16 °C (61 °F) at night. We suggest bringing a sweater or a light jacket, pants, and long sleeved shirts.

Valladolid is located in the Mexican state of Yucatán and features a great tourist attraction due to its colonial architecture, its gastronomy, and its strategic location near major sites such as Chichen Itza, Merida, and Cancun, which are 50 kilometers (30 mi), 162 kilometers (97 mi), and 158 kilometers (95 mi) away, respectively. The city was founded in 1543 by Francisco de Montejo and was named in honor of the Spanish city of the same name.

Two important passages of the history of Mexico happened in Valladolid: The Caste War in 1847, where groups of Mayan revolted against large landowners due to the precarious life that prevailed; and The First Spark of the Mexican Revolution in 1910, so it is also known as Heroic City or The Capital of the East Maya.

This destination has majestic temples and old neighborhoods of ancestry that make it a pleasant, quiet, and safe city, where you can admire beautiful old houses, a large handicraft dynamism, and colorful festivities. Valladolid is divided into six main areas plus the historical center, where hotels and restaurants are concentrated. Its colonial buildings include the Convent of San Bernardino of Siena, the City Hall, Church of St. Servacio, La Aurora Ex Loom, the Church of St Lucia, and the Museum of San Roque, which tells the story of the city. Francisco Cantó Main Park, is a large public space and a meeting point for locals and tourists, and Zaci Regional Center houses a craft center with exhibition and sale of works by local artists.

Valladolid also offers natural attractions as the X'Keken sink hole, where you can enter through a narrow hole to an underground cavern, and Zaci sink hole, where stalagmites and stalactites hang from the natural rocky ceiling and cover a great part of the sink hole.

Other destinations in Yucatan